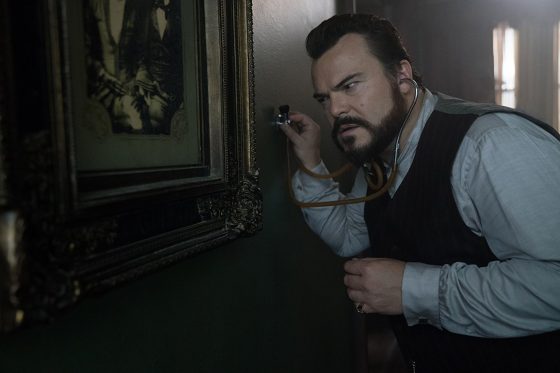 Overperforming over the weekend, The House With a Clock In Its Walls took the top spot at the box office but it was an overall a terrible weekend for most of the other new releases.

House with a Clock took in $26.8 million over the weekend, above Universal’s expectations of a debut in the low twenty millions.  It’s a higher opening that Jack Black’s prior family friendly spookfest, Goosebumps, which opened to $23.6 million back in 2015. It’s the best opening ever for director Eli Roth and the 8th and 12th best openings for stars Jack Black and Cate Blanchett respectively.  For similar movies, it’s sitting around Miss Peregrine School for Peculiar Children and Maze Runner: The Death Cure as far as opening weekend.

Paul Feig’s A Simple Favor actually moved up a spot from last weekend up to second place with another $10.4 million.  It had a strong hold of 35% and it’s made $32.5 million so far for its two weeks out.

The Nun dropped another 43% and took third place with another $10.3 million but it has topped over $100 million domestically, the fourth film in The Conjuring franchise to top that mark and it’s also made just over $292 million worldwide.

The Predator and Crazy Rich Asians rounded out the top 5 with the former suffering a massive 65% drop from last week’s already disappointing opening.  The Predator only made another $8.7 million putting it at just over $40 million for its two weeks out, which is about half of its budget.

For the three other new releases this weekend, things were incredibly rough.  Michael Moore’s latest, Fahrenheit 11/9, did not perform up to expectations. It was the 15th best opening for a documentary but it only pulled in $3.1 million.  Fahrenheit 9/11, the second highest opening documentary of all time, took in over $20 million more on half as many screens back in 2004.

Dan Fogelman’s Life Itself was also a gigantic disaster, riding toxic reviews to the second worst opening of all time on a movie debuting on between 2,500 and 3,000 screens with $2.1 million, only topped by the dire and forgotten horror movie from last year, Friend Request.

Assassination Nation also had a terrible opening, only making $733 per theater for just slightly over $1 million on 1,403 screens.  Neon, the studio behind it, seems unusually optimistic, putting out a statement that they believe it will become a cult classic despite this weak opening.

The best Per Theater average over the weekend went to the historical drama Colette, starring Keira Knightley, which made $39,197 on each of the four screens it was on.