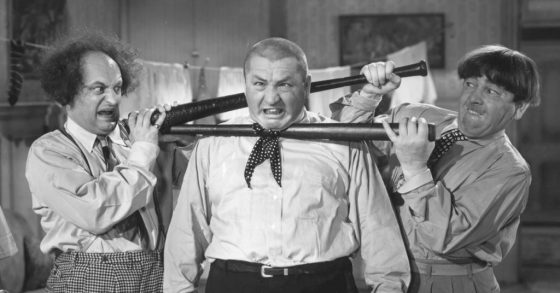 Around the time the Stooges got their star on the Hollywood Walk of Fame in 1984, songwriter Peter Quinn came up with a swinging throwback novelty song called The Curly Shuffle that became an unlikely hit.  Performed by his group the Jump N The Saddle Band, the song hit the Billboard charts at #15 in 1984. It was the only hit for the group, they had one other single as a follow-up but it didn’t chart.  Simultaneously, a group called The Knuckleheads also put out a version of the song in Canada and was a hit there, hitting #29 on the Canadian charts.  The music video for the song features clips from a ton of different Stooges shorts and it became a regular fixture at Shea Stadium during Mets games in the mid-80s.  Check out the video below.