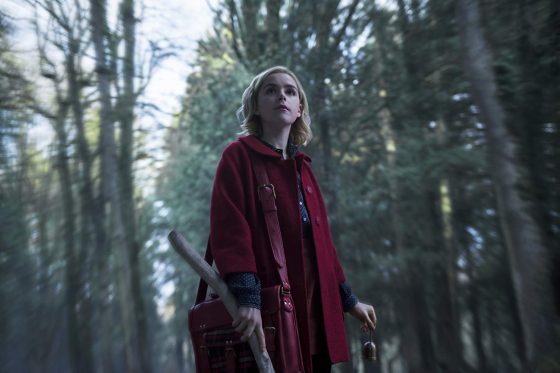 Most of us probably grew up with the TGIF version of Sabrina the Teenage Witch with a bubbly Melissa Joan Hart and a sassy Salem the cat but Netflix and the team behind Riverdale are going much darker for the upcoming Chilling Adventures of Sabrina.  Mad Men’s Kiernan Shipka plays Sabrina, whose 16th birthday is fast approaching.  Being a half witch/half human, she must make a choice between keeping her magical powers and joining the dark forces of her family or becoming fully mortal and staying with her friends, like boyfriend Harvey (Ross Lynch).  Miranda Otto and Lucy Davis are Sabrina’s Aunts Zelda and Hilda and Michelle Gomez from Doctor Who plays one of the main villains Mary Wardell.  There’s all kinds of creepy imagery going on, including what looks like a straight up reference to Evil Dead’s demonic tree, but there’s also the campy and self-aware dialogue and humor that drives Riverdale.  The show debuts on Netflix on October 26th and you can check out the trailer below.