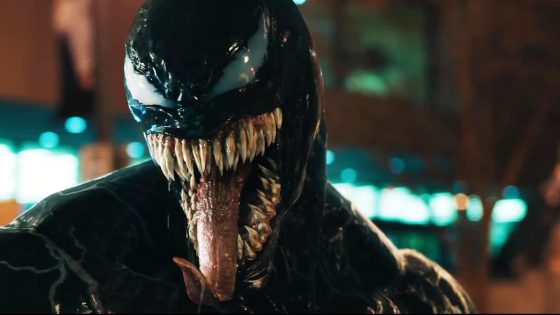 After the dreadful version of Venom that was in Spider-Man 3, fans have been waiting for a better and more accurate version of the 90s villain turned anti-hero.  Sony’s new Venom will probably leave a lot of fans disappointed again but Tom Hardy carries the movie in such a way that makes it a pretty fun, if trashy, superhero movie.

Hardy plays Eddie Brock, a journalist who is assigned to interview billionaire bioengineering mogul Carter Drake (Riz Ahmed) but finds confidential documents on the computer of his fiancée Annie Weying (Michelle Williams) and ambushes Drake with accusations of illegal human testing.  Drake destroys Eddie’s career as a result but Dr. Skirth (Jenny Slate) approaches Eddie six months later because she is horrified that Drake is subjecting homeless test subjects to the alien symbiotes that Drake’s Life Foundation discovered on a comet on one of their private space missions.  Eddie breaks in to gather evidence but becomes infected by a symbiote named Venom (voiced by Hardy), which makes Eddie the target of Drake’s security who want the creature back. This new origin for Eddie and Venom is pretty terrible compared to the classic Spider-Man based origin of the comics and the whole plot feels generic and bland (I’m shocked there wasn’t some sort of blue sky beam blasting into the sky for the climax).  The ending especially feels like the screenwriters just gave up and rush what feels like at least half a movie’s worth of plot into the final 20 minutes, with bizarre character motivation switches and tossed off explanations for what the hell is supposed to be happening. The final battle is also one of the messiest, most incoherent superhero fights I’ve ever seen as literal blobs of goo just hurl themselves at each other. Venom himself though looks great and, minus the iconic spider symbol on his chest, looks and acts like the comic character and the other action sequences besides the finale really do some fun things with his powers, the highlight probably being a battle with a SWAT team.

What saves the movie from being utter garbage is Tom Hardy.  I’m always 100% on board for whatever character quirk he decides to pull out, like the infamous Bane voice, and for Venom, Hardy throws himself headfirst into one of the most fun and bananas performances in years.  Even when he’s just normal Eddie, there’s something off about him (probably his attempt at a “New Yawk” accent) but once Venom attaches himself and the two start bickering back and forth, the movie comes into its own.  Eddie swings violently between emotions and becomes increasingly unhinged and it’s just a joy to watch. The rest of the cast can’t even hope to reach Hardy’s level and most of them feel even blander than they probably are compared to the frothing insanity of Hardy.  Michelle Williams is fun as Annie and gets some fun things to do toward the climax. Riz Ahmed is disappointingly pretty boring as Drake. It seems like he was possibly going for some sort of tech bro personality but it’s so subtle that it barely registers and even when he meets a symbiote of his own, he doesn’t get any more interesting.

No one who goes into Venom who was a fan of the comics is probably going to walk and think, “That is exactly what I’ve wanted since the 90s”. However, putting that aside, if you want a decently fun superhero movie with an incredibly insane central performance, Venom should satisfy you on that level.  It’s worth watching for Hardy and if it was anyone else, this movie would be a complete garbage fire but he carries this movie completely and makes it entertaining even when most everything else around him isn’t.