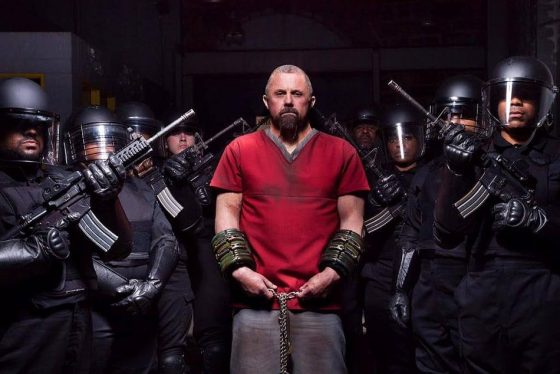 Conceived by the late Gunnar Hansen, the original Leatherface, Death House arrives next February and is essentially The Expendables of Horror.  Set in the titular super-prison where the worst of the worst are held, two special agents are taking a tour and assessing the facilities and the various treatments being performed on the inmates when the power goes out and the inmates are free.  The agents, Boon (Cortney Palm) and Novak (Cody Longo), have to survive and fight their way out of the facility and they figure out the only escape is to go deeper into the facility, but that puts them in the path of The Five Evils, five supernaturally evil beings held deep in the prison.  The horror icons who are part of the cast includes Kane Hodder, Sid Haig, Barbara Crampton, Tony Todd, Dee Wallace, Michael Berryman, Vernon Wells, Bill Moseley, RA Mihailoff, Bill Oberst Jr, Debbie Rochon and Sean Whalen and it’s directed by B. Harrison Smith, who directed smaller horror movies like Camp Dread, ZK: Elephant’s Graveyard and the movie will be out on February 23 next year and you can check out the new trailer below.