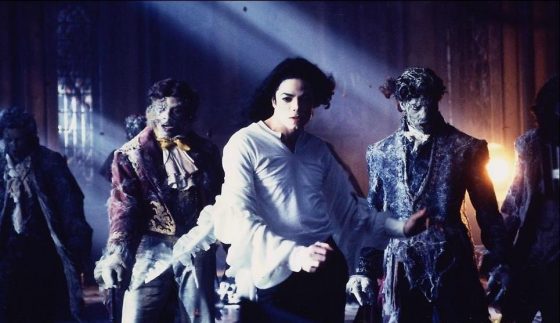 Coming out in 1996, Ghosts was a massive horror musical project that brought together Michael Jackson, Stephen King, Stan Winston and Mick Garris.  Originally conceived as a tie-in to Addams Family Values as Is It Scary?, there were contract disputes and Michael moved forward with an original short film called Ghosts.  King and Garris wrote the script and Winston directed the short and created the special effects.  The film/music video was 39 minutes long and featured Michael as “The Maestro”, a loner with supernatural powers who is confronted by the townspeople who live below his mansion and want to force him to leave.  The video combined three different songs, including the titular “Ghosts”, which seems to be an attempt to recapture the magic of Thriller and the segment in the video features some very zombie looking ghosts and Michael turning into a moonwalking skeleton.  The full movie debuted in front of the Stephen King adaptation Thinner and at various film festivals and was released on Laserdisc and VHS, but has never gotten a DVD or Blu-Ray release.  You can watch the “Ghosts” segment below.