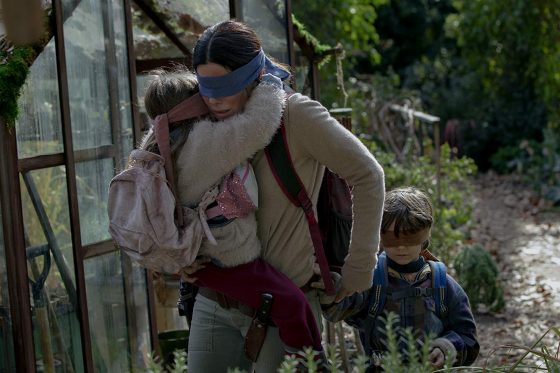 Coming to Netflix in December, Sandra Bullock stars in the apocalyptic thriller Bird Box.  Bullock plays the mother of two children who are trying to survive in a world where some sort of creatures or force drives anyone who sees it mad and they kill themselves.  After taking shelter with other survivors, Malorie (Bullock) decides to undertake a dangerous two day trek to lead her children to somewhere safe, but they’ll have to do the whole journey blindfolded.  John Malkovich, Trevante Rhodes, Sarah Paulson, BD Wong, Rosa Salazar, Jacki Weaver, Lil Rel and Tom Hollander co-star and it’s directed by Susanne Bier, who directed AMC’s miniseries The Night Manager and movies like Brothers and After the Wedding.  The movie will be streaming and in select theaters on December 21st.  Check out the trailer below.