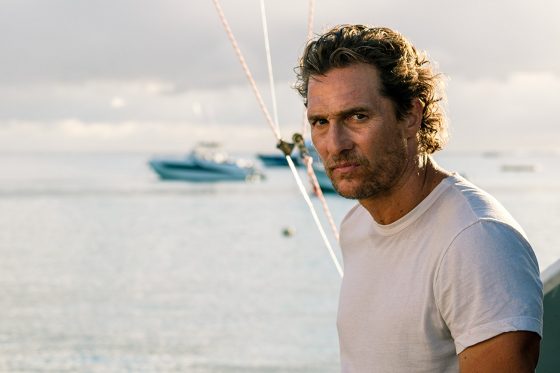 Originally supposed to have already been out in theaters last month, Serenity was delayed and is now coming out at the end of January next year.  Not to be confused with the Firefly movie of the same name, Matthew McConaughey stars as Baker Dill, a fishing charter captain on the quiet Plymouth Island.  His ex-wife Karen (Anne Hathaway) comes back into his life and begs Baker to kill her new husband, played by Jason Clarke, by taking him on a charter and then murdering him and dumping the body in the ocean.  Baker tries to decide what he will do but this new trailer seems to heavily imply there’s some sort of weird paranormal/supernatural thing going on with Plymouth Island, like it’s some sort of purgatory not on any maps or there’s some unforeseen force controlling everything a la Lost and everyone and it’s not just a throwback to 90’s thrillers like it seems on the surface.  Diane Lane, Djimon Hounsou, and Jeremy Strong co-star and it was written and directed by Steven Knight, who previously directed the Jason Statham movie Redemption and the Tom Hardy movie Locke and also wrote the script for Eastern Promises and co-created Peaky Blinders and Taboo.  Serenity is out on January 25th and you can check out the trailer below.