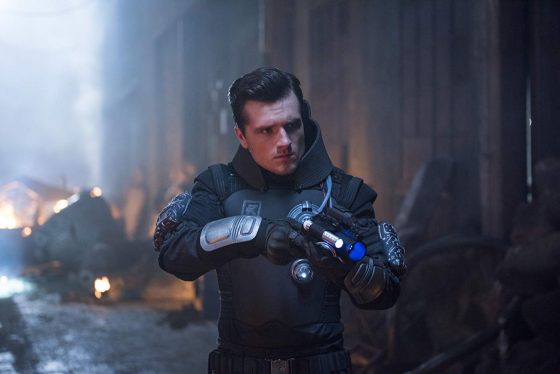 Hulu’s Future Man was one of the biggest surprises of 2017, delivering one of the best comedy shows across all the streaming services with it’s over the top violence, pitch perfect parodies and references and a trio of great leads.  At the end of the first season, Josh Futturman (Josh Hutcherson) believed he had fulfilled his unlikely destiny of saving the future of humanity from a group of genetically enhanced beings called Biotics when their alledged creator, Dr. Kronish (Keith David) sacrficed himself in the present day.  Josh was arrested but content in his knowledge that he had helped his allies Wolf (Derek Wilson) and Tiger (Eliza Coupe) see a brighter future but that seems to not be the case in season 2.  Much like Terminator 3, it seems the dark future wasn’t stopped, just delayed or, in this case, altered into a new form of disaster and the trio needs to reunite and jump across time to try and fix things again.  It looks like most of the fun and craziness of the first season is here again and it seems like Haley Joel Osment will have a bigger role and show creator Seth Rogen will be appearing as well.  I just hope we havent seen the last of Wolf’s 80’s alter ego Corey Wolfheart, underground rock star chef.  The new season is on Hulu on January 11th and you can check out the season 2 trailer below.