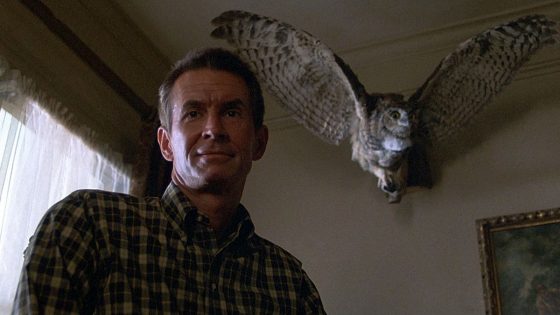 The Psycho franchise is never really thought of that often as a major horror franchise but it’s had the original Hitchcock classic, 3 sequels, a *shudder* shot for shot remake and the Bates Motel TV series.  Psycho III was directed by star Anthony Perkins, one of his main requirements to return as Norman Bates, and finds him reverting back his murderous ways as “Mother” returns in full and murders a slew of victims, including a sleazy musician played by Jeff Fahey.  Musician Carter Burwell, who had recently composed the score to the Coen Brothers debut Blood Simple, was brought in by Perkins to compose the score but Universal, in an attempt to appeal “to the kids”, wanted some pop hits on the soundtrack to further market the movie and potentially sell some soundtrack albums.  Burwell tried a few different songs, including one with Danny Elfman, but Universal rejected them all.  Burwell finally sold Universal on a slight variation of his score, made into more of an electro-pop song and thus “Scream of Love” was born.  Perkins himself guest VJed on MTV to introduce the music video, which features Perkins and a “Hitchcockian woman” and flips between the new Psycho III visual style, which seems influenced by the works of directors like Argento, and the classic black and white.  Check it out below.