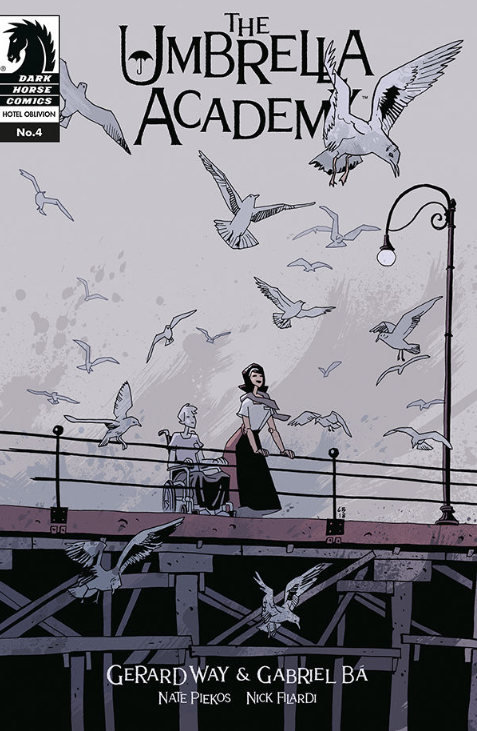 Perseus Corporation has a few surprise guests roaming its laboratories. Number Five and the Rumor stumble into a gunfight between the Murder Magician and his companion against the Perseus security team. Meanwhile, up in Afterspace, Spaceboy and the Kraken take a spacewalk in the wild and unpredictable void to explore a derelict spaceship. The pair discovers St. Zero’s ship, an important clue to uncover more about their father, Sir Reginald Hargreeves. Back on earth, the White Violin and Mother spend some quality time to reflect on the White Violin’s purpose to the Umbrella Academy, and where her future is heading towards.

The otherworldly Hotel Oblivion was built to contain Reginald Hargreeves’s foes and ensure they will never harm the planet again. Years have passed and the once unescapable prison has a few escapees on the loose. The Murder Magician, once a great enemy to the Umbrella Academy, has returned to earth and is desperate to be far away from all thing related to Hargreeves’s. However, the director of the Perseus Corporation wants to travel to the Hotel Oblivion and is very eager to get his hands on the escapees no matter the cost.

Vanya, a.k.a the White Violin, gets a reality check from Mother, her robotic mentor that seems to have an alternate motive set for her rebellious daughter. The White Violin was once a valued member of the team, but betrayal and mistrust in the past have cast her aside from being a reliable person. While she mopes in self-pity, Mother takes the opportunity to believe in more than her powers, something that she heavily relied on and feels cursed that she can’t use.

In this issue, many members of the Umbrella Academy faced their past to understand their future. Some looked into the deep crevices of space, some with the help of substances and others with a stern chat. As the team gets closer to finding themselves, a great evil reveals itself to seek revenge on the world and its protectors. Gerard Way is preparing to check out a powerful foe from the hotel, and the Umbrella Academy better be ready.

The Umbrella Academy: Hotel Oblivion #4 will be on sale January 2nd, 2019.