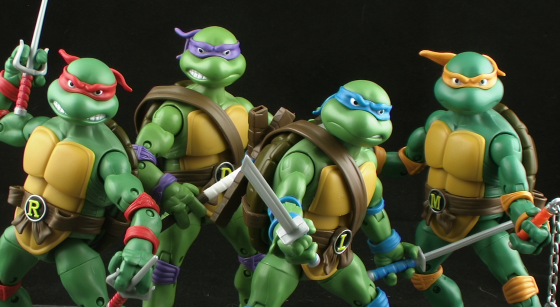 Although Vanilla Ice and “Ninja Rap” draws most of the attention, “Turtle Power” by Partners in Kryme for the original 1990s TMNT movie is arguably the greatest Turtles jam of all time, even though it incorrectly says Raphael is the leader of the team (There also didn’t seem to be any sort of rivalry between the rappers, as PIK had songs in Cool as Ice and toured with Ice, Tone Loc, Rob Base and more recently).  As we recently learned from Game Grumps, in 2015 Partners in Kryme were back with a new Turtles song called “Rock the Halfshell” to celebrate the original movie’s 25th anniversary and it samples the iconic song “Rock the Casbah” by The Clash, replacing lyrics like “Shareef Won’t Like It” with “Shredder Won’t Like It”.  It’s not quite as epic as “Turtle Power” but it’s still wonderfully goofy and fun and you can check out the official music video below, where PIK travels around various locales in Texas with a group of TMNT costumed actors.