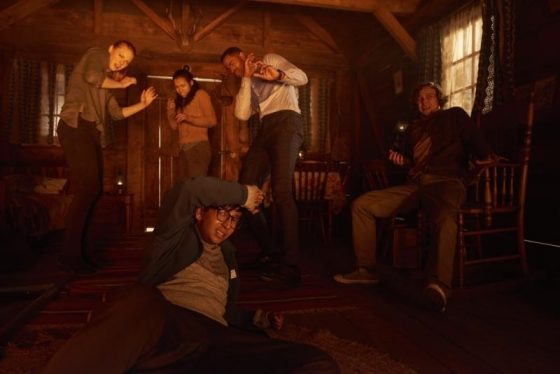 As has been the case for at least the last five years, every new year at the box office kicks off with a horror movie and 2019 was no exception, however, Escape Room is actually a lot more fun than most of the dregs we’ve gotten previously.

Taking the recent attraction trend to its most extreme, six strangers are sent invites to participate in an extreme escape room with $10,000 on the line for completing it (which no one ever has).  The group quickly realizes that the dangers of the rooms are real and they have to quickly figure out the puzzles of each room or die in horrific ways. The movie does a surprisingly good job of mimicking a lot of the puzzles and clues you would encounter in a less life or death escape room in real life, with lots of number puzzles, hidden keys and environmental obstacles to overcome.  The various rooms of Escape Room are all visually cool and interesting and you spend a solid amount of time in each one. There’s stuff like an upside pool lounge, a room that transforms into an oven, a cabin situated on an icy lake and more. Being PG-13, the movie lacks the gruesome thrills of Saw (obviously one of it’s big inspirations) but the room design and cleverness of the puzzle solutions makes up for it.  The major complaint for the movie is the ending. After all the cleverness and reveals about who everyone is and why they are there, the actual reveal of what’s going on is a pretty major letdown. I won’t spoil it but the motive behind company running the escape room is something we’ve seen at least a dozen times or more in other movies and it’s a boring and cliche resolution that is a pretty big bummer. There’s also a pretty terrible and obvious set-up for a sequel or an entire Escape Room franchise but all of that could definitely have been taken out to focus on this first movie and wrap it up in a more satisfying way.

Acting wise, it’s pretty much on par with a typical Saw movie cast, although everyone except Jay Ellis’ Jason is slightly more likeable here since the reason they are there, without too much spoiling, is not for some sort of punishment for past sins, so they are in general slightly better people than Jigsaw’s usual victims.  Tyler Labine and Deborah Ann Woll are probably the most recognizable members of the cast but Taylor Russell’s Zoe and Logan Miller’s Ben emerge as the sort of co-heroes, with both of them having to overcome their personal issues to survive. The rooms are the main villain of the movie but it definitely feels like it could use a Tobin Bellesque antagonist (although there may be one in the theoretical sequels setup by this movie).

Escape Room was surprisingly fun way to kick off 2019 and, despite it’s terrible ending, there is enough cleverness and fun in the design of the rooms and the puzzles within that make it definitely worth checking out at some point, especially if you’ve experienced an escape room before.

Past Winners Collide in Escape Room: Tournament of Champions (Trailer)

Solve the Clues or Die in Escape Room (Trailer)