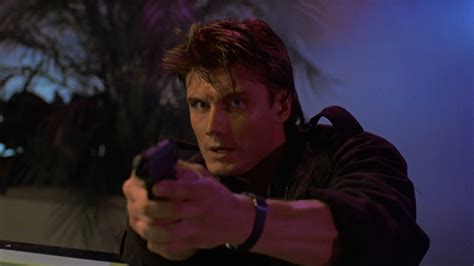 We had to pull a bit of an audible for our first commentary of 2019 as Blackjack became part of the new IMDB streaming service, Freedive, and it’s now available for free, but with ads, so that kind of messed up our plans for a commentary on it.  Weren’t leaving you Dolphless however, as we’re now going to watch the 1990 Dolph classic, I Come In Peace aka Dark Angel instead.

Dolph plays Houston detective Jack Caine, whose latest case involves an intergalactic drug dealer who is killing people after pumping them full of heroin and then harvesting their endorphins, which is apparently the drug of choice in other galaxies.  Jack is paired up with an uptight FBI agent and the mismatched duo has to figure out what is going on and stop it before Earth becomes an alien drug factory.  The movie was directed by Craig R. Baxley, who also brought us cheesy action gems Action Jackson and Stone Cold.  The movie is available in full on YouTube and we’ll be dropping our commentary at the end of the month.  (Side note: you should absolutely still watch Blackjack, especially now that it’s free for pretty much everyone)

EA Commentary: I Come in Peace

Movie of the Month: Stone Cold