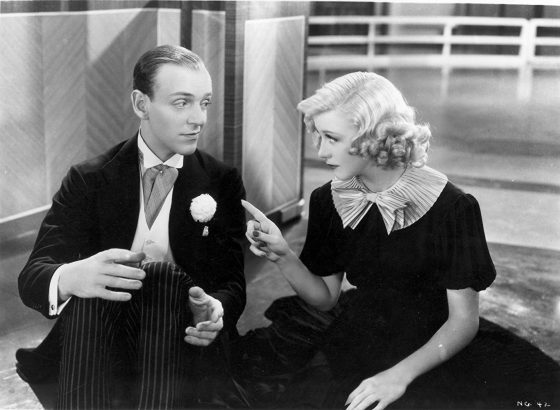 Fred Astaire and Ginger Rogers are one of the most iconic duos in film history and many critics consider Swing Time to be their great collaboration.  Released in 1936, Swing Time follows Astaire as Lucky Garnett, a dancer who is forced by the father of his bride to be to raise $25,000 as a sign that he has good intentions and can provide for his daughter.  Lucky heads to New York with buddy Pop (Victor Moore) and he runs into Penny (Rogers), a dance teacher, and, although they don’t hit it off, the pair become partners and get a shot at auditioning at a popular club to be their featured dancers and comedy and romance ensue.  The duos’ dance number set to the song “Never Gonna Dance” is considered by many to be the greatest Astaire/Rogers dance sequence of all time and one of the greatest dance sequences, period, and the song “The Way You Look Tonight” won the Academy Award for Best Original Song and became a jazz standard that was covered afterward by the likes of Frank Sinatra, Billie Holiday and Bing Crosby. The film is included on many Best lists, including the AFI Top 100 2007 list and Entertainment Weekly’s Top 100 Films and it’s including the National Film Registry  Check out all the music and dance sequences below.

Musical Montage: Singin’ in the Rain