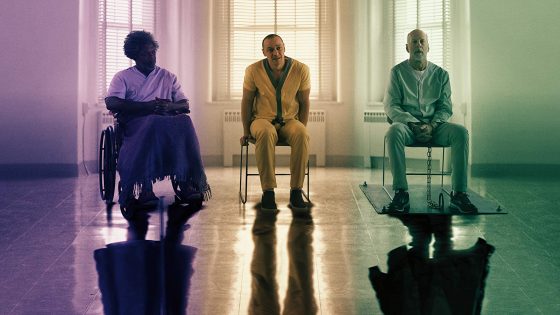 After the absolute nadir that was The Last Airbender, M. Night Shyamalan has been crawling his way back starting with The Visit and the excellent Split.  With the reveal at the end of Split that it took place in the Unbreakable universe, Glass marks the third entry in this recently revealed trilogy.

Picking up three weeks after Split (and 19 years after Unbreakable), David Dunn (Bruce Willis) has been trying to track “The Horde” aka Kevin Wendell Crumb (James McAvoy), who has continued kidnapping and killing girls to satiate “The Beast”, his most powerful and uncontrollable personality.  Dunn manages to track The Horde to an abandoned factory with the help of his son Joseph Dunn (Spencer Treat Clark), who has become his dad’s “guy in the chair” during the time since Unbreakable, but after a brief skirmish, the duo are picked up by authorities and transferred to Raven Hill Hospital, where Dr. Ellie Staple (Sarah Paulson) wants to convince them that their abilities are delusions that can be cured with the proper treatment.  Also at Raven Hill is Mr. Glass (Samuel L. Jackson), who has been there since David revealed what he did, which we learned via Unbreakable’s somewhat weird end text. Most of the story takes place at Raven Hill and it becomes a sort of One Flew Over the Cuckoo’s Nest style story of David and Kevin beginning to doubt their powers thanks to the wearing down by Dr. Staple and waiting for Mr. Glass to reveal his grand scheme. The movie also picks up on Unbreakable’s ideas about a more grounded superhero or “what if comics books were real?” ideas, this time exploring the idea about how authorities might actually deal with people who claimed to have super strength or abilities. Anyone who is coming to this looking for some sort of fun, MCU style superhero movie has both egregiously misinterpreted both Unbreakable and Split and will probably be pretty disappointed.

While the plot and ideas seem to lean slightly more toward Unbreakable, the acting, especially which characters are the focus, definitely lean toward Split.  James McAvoy is the star of this movie, delivering another incredible performance that reveals even more personalities hiding inside his mind along with old favorites like Patricia and Hedwig from first film (I can’t even imagine someone not watching Split and seeing Glass because the mechanics of Kevin, such as “who is in the light”, are not explained at all and the movie just assumes you are onboard).  David Dunn is actually a pretty minor character throughout a lot of the middle part of the movie, really only factoring in for the beginning and end but at least Bruce seems like he’s interested and engaged. Samuel L. Jackson is also incredible, especially toward the second half of the movie when Mr. Glass’ scheme starts coming into focus. Sarah Paulson is great as well and exudes a lot of quiet menace behind a professional and caring facade.  There’s a bit of strangeness with the supporting characters, one for each of the main trio (Joseph Dunn, Casey (Anya Taylor-Joy) and Mrs. Price (Charlayne Woodward)) but none of them really have a lot to do and there’s a pretty major bit of inexplicable convenience when they all just happen to show up at the exact same time, just in time for the climax. Speaking of nitpicks, some of the dialogue is classic M. Night in a bad way, with weird phrasing or bluntness (also, take a shot every time someone says the new Osaka Tower skyscraper is “the tallest building in the city”) and the ending suffers a bit from Return of the King syndrome, where it feels like there are about three or four endings before the movie actually ends and it also feels like a TV show where they know they are going to be canceled and jam 3 seasons worth of storyline into a few episodes. It feels like M. Night believed this was his only shot to do everything he wanted to in the Unbreakable/Split universe and he jammed everything he possibly could into it, to mixed results, but I was mostly on board for this movie’s particular crazy swerves.

I definitely enjoyed Glass much more than it seemed a lot of critics did and it’s an interesting expansion of the Unbreakable/Split universe’s mythology.  You do get some comic book movie style fights but the movie also explores interesting ideas like the power of belief and more realistic implications of superpowered beings in the world well.  Most of the performances, especially James McAvoy and Samuel L. Jackson, are great and if you were a fan of the style and tone of the prior two movies, I would definitely recommend checking out Glass, although be ready for things to probably not to work out exactly as you might expect.