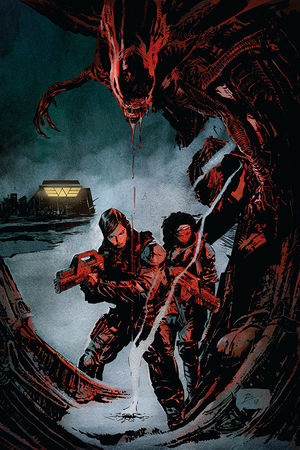 Following the events of Alien: Isolation and Aliens: Defiance, this new mini-series returns Amanda Ripley and Zula Hendricks to once again take on the corrupt Weyland-Yutani and the bloodthirsty xenomorphs. Amanda Ripley, daughter of Ellen Ripley and former Weyland-Yutani engineer, has been recovering after the destruction of the Sevastopol Station in Alien: Isolation. Amanda was the sole survivor between the xenomorphs and Weyland-Yutani attempt to capture an alive specimen. Zula Hendricks was a member of the Colonial Marines that was sent to a mission to salvage the cargo hauler Europa in Aliens: Defiance. The cargo hauler was filled with xenomorphs and Weyland-Yutani had forced the team to recover a sample. Zula was one of the few surviving members that were able to escape chaos but was placed on a blacklist and carefully watched by the Weyland-Yutani. In order to stop Weyland-Yutani from spreading more terror, Zula and Amanda will try to find clues to the location of Weyland-Yutani research and dismantle the xenomorph project.

Aliens: Resistance is an action-pack thrill ride with ass-kicking heroines fighting to protect the future of humanity. Brian Wood aims to deliver an exciting tale with plenty of explosive violence, gory sights and scary moments with furious xenomorphs. Robert Carey, Dan Jackon, and Nate Piekos layout great visuals that should please any sci-fi and action fan. As Zula and Amanda discover Weyland-Yutani dark secrets, the hunt to stop the pair will begin in the next issue.