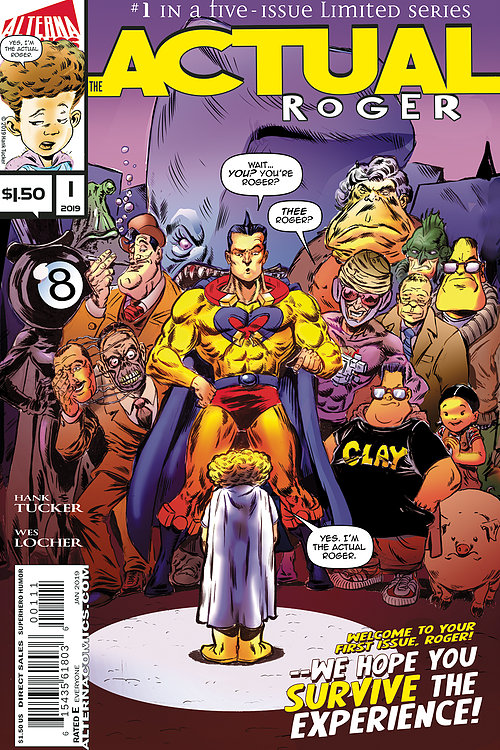 In a world with actual superheroes, young Roger Beanman dreamed of donning a cape and flying in to save the day. Roger had idealized his city’s protector Magnanimo, the extraordinary hero of Monopolium. But just when Roger had given up the idea of being a superhero, a strange meteorite lands in his backyard. Roger and his friend Clay Mason, inspect the crash site, only to accidentally be exposed to great power.  Before Roger can explore his new gifts, the Bureau of Anomalous Persons swoops in and recruits Roger to be their latest recruit. Now Roger is on the track to become the hero’s his dreamed up, but that’s if he can handle the side-kick training.

Series creator Hank Tucker’s had been involved with many classic comic and cartoon franchises, and The Actual Roger is Hank’s creative spin on a coming-of-age story and superhero mythos. Issue one begins right at the point where Roger Beaman had given up pretending to be a superhero with his imagination and starts to find a new passion to follow. So right at the change from childhood day-dreams to growing up a little, fate intervenes to grant him super abilities. However, the Bureau of Anomalous Persons, a division that monitors and handles superpowered people, takes Roger to this facility, no matter if he wanted or not.

The Actual Roger #1 is a fun read that plays with the idea that superheroes and supervillains all go through the same awkward learning curve to become who they are. And that there is a government department watching over every super person that pops up and has to deal with them the best or worse they can. Hank Tucker use of cartoony and abstract art gives the comic a Saturday morning cartoon vibe. Characters come in different shapes and sizes, and their personality comes through nicely by their clothes and speech. The story and characters should connect with a lot of comic book fans, and makes a great addition to any reader looking for a family-friendly series.