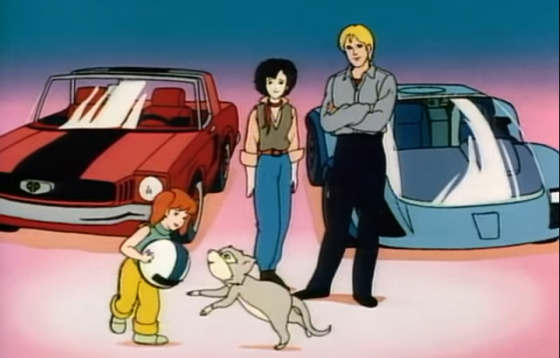 The 80s were full of classic arcade games like Donkey Kong, Frogger, Galaga, Q*bert, most of which also came to Saturday mornings via animated series.  One of the strangest transitions between game and show was Pole Position, which hit  CBS in 1984.

If you didn’t already know (but should now thanks to the above video) 1982’s Pole Position was a racing game from Namco/Atari that featured you controlling an F1 car and trying to complete laps in the fastest time possible and trying not to explode in a fiery wreck.  The animated series only really kept the concept of cars, crafting a narrative that was more like Spy Hunter or fellow 80s cartoon MASK.  The show followed siblings Tess, Dan, and Daisy Darrett, who traveled the US as the “Pole Position Stunt Show” but were secretly agents for the government and their vehicles, Wheels and Roadie, were highly advanced, with AI and the ability to transform.  The Darretts fought crime and helped various people at each spot on their stunt show tour, although that tour was fairly short-lived as the show only lasted 13 episodes.  The show featured some strong vocal talent including Lisa Lindgren, David Coburn (who also voiced Captain Planet), Kaleena Kiff, Melvin Franklin (of The Temptations) and Darryl Hickman and it also has one of the greatest theme songs in cartoon history.  You can watch the entire first episode of the show below, titled “The Code” and the rest of the series seems to be on YouTube as well if you dig this first episode.