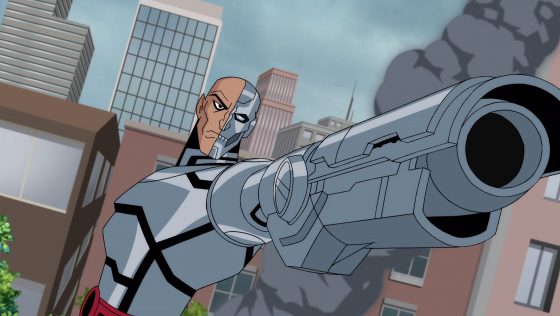 The Justice League faces a powerful new time-traveling threat in the next DC Animated movie, Justice League vs The Fatal Five.  Three of the titular Fatal Five, Mano, Persuader and Tharok, travel in time to Metropolis in order to find newly crowned Green Lantern Jessica Cruz, who is somehow the key to freeing the other two Fatal Five members and making them possibly unstoppable.  Luckily, the Justice League has its own new ally from a different time, Star Boy, who is full of volatile power and could help the League defeat the Fatal Five.  The movie seems like it might be a bit of a throwback to Justice League/Justice League Unlimited, as that show’s Trinity is back to voice Batman, Superman and Wonder Woman (Kevin Conroy, George Newbern, and Susan Eisenberg) and the look feels reminiscent of those shows as well.  Sam Liu is back to direct and Bruce Timm is an executive producer.  The movie will be available digitally on March 30th and on DVD/Blu-Ray on April 16th, check out the trailer below.