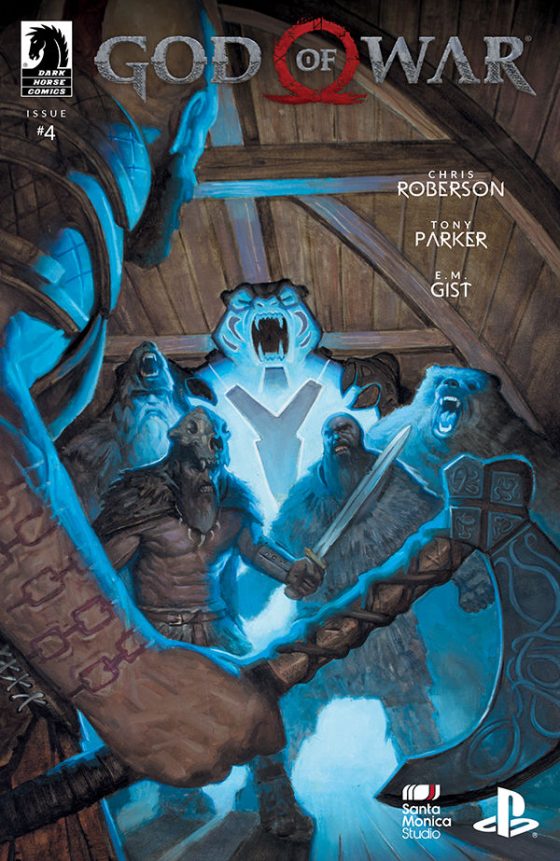 When his words of peace fail to stop the berserkers from attacking, Kratos is pulled into battle. Surrounding the former God, the berserkers transform into their bear form. Kratos’s patience to hold back his rage is lost when the berserkers give up their chance for a truce. They have followed Kratos to his home, placed Atreus in danger and now rejected Kratos offer. To save his family and end the berserker threat, Kratos launches into the fight, risking losing himself to the bloodlust once again!

Kratos ventures far from his home to confront the berserkers on their land. When Kratos tries to reason with the berserkers, their actions to charge at him steals their fate to fight him. But his temper boils and the anger begins to take control. Armed with only an ax and his bare hands, Kratos uses his brute strength to take on the monstrous bears. This battle dares Kratos to become a vicious killer and let the rage guide his actions.

Chris Roberson’s vision for Kratos story to protect his new life is dramatic and action-pack as the games it was based on. The inner struggle for Kratos leads him to become a cautious warrior than he used to be. In his earlier years, Kratos would not hesitate to tear off limbs if the slightest threat presented itself. Roberson presents a wiser Kratos, trying his best to raise a son in a different path. But some events no father can control and Kratos is prepared to stop any foes that wish his family harm. Tony Parker’s amazing artwork shows off Kratos’ wrath. Kratos bone-crunching hits and fierce battle cries are exciting and intense. God of War is a great series that explore more about Kratos relationship to his son and builds up the drama that the 2018 hit video game carries over. Gamers and comic fans that enjoyed the games and the character of Kratos owe it to themselves to pick up this comic.