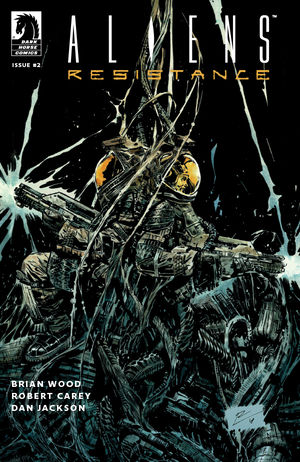 Hidden far from public eyes, Weyland-Yutani Blacksite houses a facility researching xenomorphs and creating deadly biological weapons. Amanda Ripley and Zula Hendricks fly to the Blacksite, hoping to gather more evidence about Weyland-Yutani’s unscrupulous plans. Weyland-Yutani will do anything to cover up its past deeds, and the pair seek to make the corporation pay. But the Blacksite is well guarded. The defensives are automated and advance androids patrol the hallways. Once Amanda and Zula see the extent of Weyland-Yutani’s project, they engage hostile forces to prevent Weyland-Yutani’s from completing its work.

Amanda and Zula know first hand how far Weyland-Yutani will go to hide the truth. Many lives were lost due to Weyland-Yutani trying to control the xenomorphs. Both Amanda and Zula lost team members in past incidents and have toughened themselves to handle deadly situations. Knowing that the Blacksite will be defended, Amanda and Zula are armed and prepare to face anything one that tries to stop them. Zula also brings her robotic companion Davis with her, although he is without a body. His computer conscious is attached to Zula’s weapon. It’s kind of funny to see a talking gun.

Once again, the visuals are covered in a dark shadow of dramatic tension. The Blacksite is huge and empty, devoid of any human signs. However, when Amanda and Zula do encounter something, it’s a fight for survival. A shootout breaks out, with bullets piece though space suits and android guts spill out. Amanda and Zula only discover a small portion of the Blacksite, there are still hidden dangers lurking behind the walls. Brian Wood patiently builds up the moment when the xenomorphs make their appearance and its guarantee to throw everything into chaos. Killer androids, deadly aliens and the cold grip of space awaits the heroes in next month’s issue.