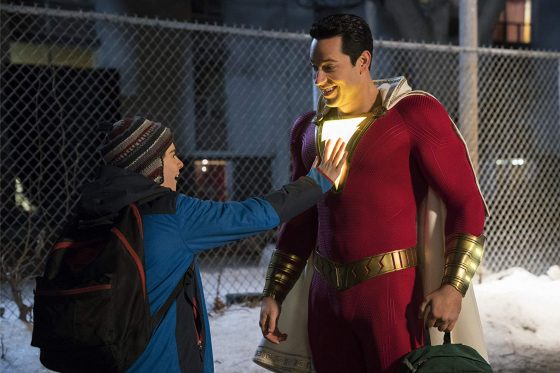 After the insane and over the top world building and underwater action of Aquaman last year, the DC universe is getting it’s first full out and out comedy in April with Shazam!.  Asher Angel stars as orphan Billy Batson, who is chosen by The Wizard (Djimon Hounsou) to inherit his powers and become the world’s latest superpowered champion, Shazam (Zachary Levi).  Being a 14-year-old kid, Billy and his foster brother Freddy (Jack Dylan Glazer) are more concerned about what kind of hi-jinks they can get into but when the evil Dr. Sivana (Mark Strong) threatens the world, Billy has to get a handle on his powers to save the world.  There’s lots of Bigesque humor as Billy exploits his grown-up alter ego and it seems like it’s going out of its way to poke fun at the dead seriousness of the movies that kickstarted the DCEU.  Lights Out director David F. Sandberg is directing and the movie is out on April 5th.  Check out the new trailer below.