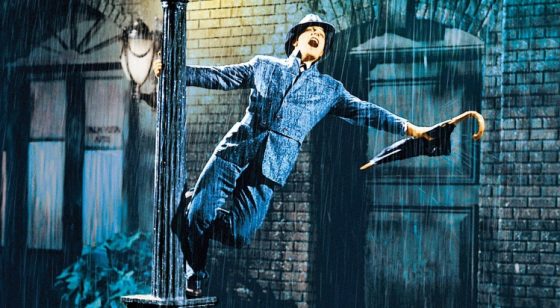 Considered by many the greatest musical of all time, Singin’ in the Rain took a while to gain the acclaim and respect it deserved.  Released in 1952, Singin’ in the Rain was actually only a modest hit at the box office and barely registered at the Academy Awards, only getting a nomination for Best Original Music Score and a win for Best Supporting Actress for Jean Hagen.  The movie stars Gene Kelly as Don Lockwood, a silent film star whose studio is making the transition to “talkies” like every other studio.  Lockwood’s co-star, the vain and conniving Lina Lamont (Jean Hagen) has a grating and annoying voice and test audiences laugh their first sound picture out of the test room.  Don, along with his best friend Cosmo (Donald O’Connor) and love interest Kathy (Debbie Reynolds) pitch a plan to salvage the movie by turning it into a musical and have Kathy dub all of Lina’s lines and singing.  The movie has been twoard the top of most of AFI’s lists over the years including #1 on the Top 100 Musicals, “Singin’ in the Rain” at #3 on the Top 100 songs, and #5 on the overall AFI Top 100 list from 2007 and it’s in the National Film Registry.  You can check out the exceptional song and dance numbers below, including the now legendary scene featuring the title song and Donald O’Connor’s masterclass in physical comedy, “Make Em Laugh”.