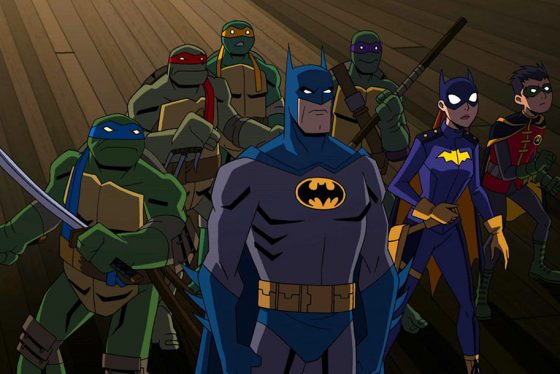 Based on the fantastic and fun crossover comic from IDW and DC, Batman vs Teenage Mutant Ninja Turtles arrives soon to bring the comic to life in animated form.  Following the story from the comics, the Turtles track Shredder to Gotham City, where he’s hatching a plan to takeover the world by teaming with Ra’s Al Ghul and Batman’s rogues.  Being his usual untrusting self, Batman at first battles the strange new mutant visitors to his city but reluctantly agrees to team-up when he learns they are on the same side.  Troy Baker is voicing both Batman and The Joker, Darren Criss is Raphael, Kyle Mooney is Michaelangelo, Baron Vaughn is Donatello and Eric Bauza is Leonardo with Rachel Bloom, Tom Kenny, John DiMaggio, Tara Strong, Cas Anvar, Carlos Alazraqui, Keith Ferguson, Brian George, and Ben Giroux also featured in the ridiculous voice cast.  Justice League Action and Death of Superman (2018) director Jake Castorena is directing and the movie will debut at WonderCon Aneheim on March 31st with a home release hopefully soon afterwards.  Check out the first trailer below.