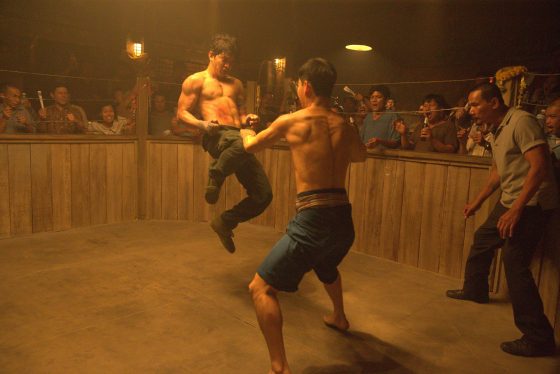 Expectations have been high ever since we saw the first trailer for Triple Threat back in 2017 but now that it’s finally here, it happily exceeds expectations as a must-see for old-school action fans.

Perhaps the biggest selling point of Triple Threat is it’s cast.  Iko Uwais, Tony Jaa, Tiger Chen, Michael Jai White, Scott Adkins, Michael Bisping, Celina Jade, and Jeeja Yanin are all featured in the movie and, normally, if just one of those action stars was featured, the movie would be worth keeping an eye on but all of them together makes this an Expendables level event (maybe replace Michael Bisping with someone like a Marko Zaror or Cung Le but he’s fine).  The movie features Jaa and Chen as mercenaries for hire/underground fighters who take a job leading a team into the jungle on what they are told is a humanitarian rescue mission. The team are actually criminal assassins and the mission was to rescue one of their own and leave everyone else dead at a secret MI6 prison, including the family of Uwais, who was running security. The criminal team, now reunited, get a new job to take out an heiress (Celina Jade), who is using her family’s wealth to fund efforts to eliminate the criminals’ employers in the country of Maha Jaya.  What’s a little strange, but doesn’t detract from the movie, is that the trio of Jaa, Chen and Uwais aren’t actually a fighting trio until the end of the movie. Uwais is off on his own mission of revenge but aids the other two while infiltrating and gaining the trust of Adkins and his team. The plot is solid but basic and is in the genre of something like 16 Blocks or The Gauntlet where our main characters are on the run through a city with a group of villains in pursuit.

The plot is really only the skeleton to hang action sequences off of and, in that, it succeeds greatly.  Triple Threat is basically almost non-stop action right from the start with a raid on the jungle prison that feels straight out Predator and continues all the way through to the end.  There’s also a raid on a police station that seems like it’s paying homage to Terminator and multiple fights that are a dream for fans who have been keeping up with the old school action that has been thriving on VOD from directors like Triple Threat’s Jesse V. Johnson or Isaac Florentine, like Scott Adkins vs Tony Jaa, Michael Jai White vs Iko Uwais and more, all of them with fantastic choreography and brutal action.  The action throughout is brutally old-school, with tons of squibs and, particularly, an over the top kill with a grenade launcher. As superhero films take over the theaters (which we love as well) and throw more and more CG at audiences, it’s refreshing and nostalgic to see movies like Triple Threat doing everything mostly practically, which makes the action so much more real and intense.

With its cast and kick-ass trailers, the bar was set pretty high for Triple Threat but it easily clears it and then some.  If you’re a fan of old school action and martial arts, you’ve got the best of the best battling each other in a must-see action event that feels like the culmination of the awesome trend that’s been happening in VOD with movies like Savage Dog, Headshot, Falcon Rising and more that feature Triple Threat’s stars.  If you’re even just a fan of one of the stars here, Triple Threat delivers and you can watch it next Tuesday (March 19th) on the big screen for one night only in select theaters or next Friday (March 22nd) on VOD.