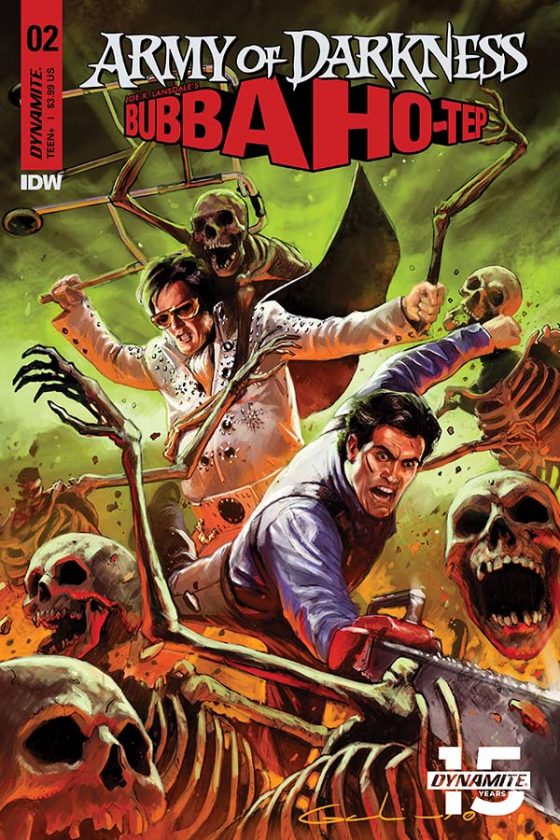 Bubba Ho-tep opens a time portal that sucks Ash into Las Vegas in the 1970s. Luckily, Ash isn’t a stranger to time travel. Trying to find Bubba Ho-tep, Ash stumbles across the opening of an exhibit called “Necronomicon Ho-tep”, with the special guest ribbon cutter Elvis. Ash seeks out the help of the 60s era Elvis, but the King needs convincing all over again. Can the two punch and make friends before Bubba Ho-tep unleashes the dead in sin city?

Landing in Las Vegas in the 70s lets Ash see his idol in his peak popularity. Ash makes his way to Elvis’s dressing room but gets easily distracted with one of Elvis’ outfits. Who wouldn’t want to wear a jewel-studded jumpsuit and bust out a karate pose? The King arrives to find a stranger in his sanctuary and has some words for the uninvited guest. Ash attempts to convince Elvis for help, but the King is just as stubborn as his older self. It takes a shuffle and some screams before the pair are reminded of the threat of Bubba Ho-tep.

The bumbling, yet charming Ash and mummy fighting rocker Elvis continue their amazing team up in this hilarious time jumping adventure. The story takes a surprising twist by having a younger Elvis appear, bring back the Elvis to his prime fighting build before he had one too many fried peanut butter and banana sandwiches. Vincenzo Federici poses Ash and Elvis in awesome action shots, letting Elvis leaping in the air with powerful jump kicks and Ash giving the business end of the boomstick to some mummy faces. The series continues to be an enjoyable read and plays well with each character’s quirky traits. Bubba Ho-tep has just begun his rampage with Ash and Elvis, and he takes his terror to new heights in the next issue.