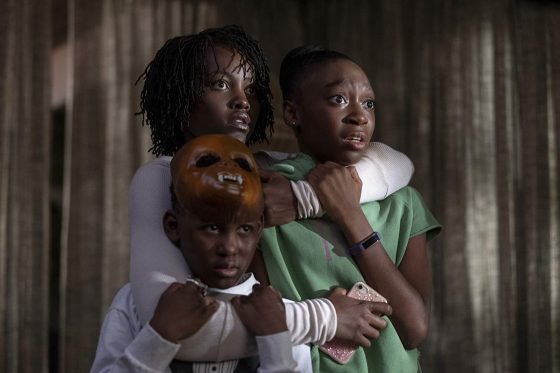 After years of hilarious sketches on Key and Peele, Jordan Peele put his talents behind the camera for 2017’s Oscar-winning horror movie Get Out.  He’s followed that up with a “new nightmare”, Us, which trades the overt social commentary of Get Out for visceral and tense scares.

Us stars Lupita Nyong’o as Adelaide Wilson who, along with her husband Gabe (Winston Duke), son Jason (Evan Alex) and daughter Zora (Shahadi Wright Joseph), are heading to their summer home near Santa Cruz for vacation.  Adelaide grows increasingly tense as something terrible happened to her as a little girl at the Santa Cruz boardwalk and her fears are proven correct when a family of disturbing doppelgangers arrives and starts to terrorize the family.  Things escalate from there but there are some fun twists and reveals that definitely should not be spoiled. If you’re the kind of person who needs an exact explanation for what’s going on, you may be disappointed with the third act reveals but, if you can suspend your disbelief, the moment to moment tension and danger is excellent and further confirms Peele’s chops as a horror auteur.  He also doesn’t forget his comedy roots though and there are funny bits sprinkled throughout Us, including lots of dad jokes from Winston Duke. There are some great set pieces and sequences, including a tense battle in the water between the Winston Dukes on Gabe’s crappy boat and the entire sequence where the doppelgangers arrive is a masterclass of suspense and squeezing tension.

The look of the doppelgangers is instantly iconic and distinct and the cast does an incredible job of transforming into completely different characters, especially Nyong’o who seems to summon a voice straight from the depths of hell as her doppelganger Red.  Winston Duke is also fantastic, going full dorky dad for Gabe and then silent and brutal oaf for his doppelganger Abraham. Evan Alex and Shahadi Wright Joseph also do a great job of making their characters distinctive as well.  Tim Heidecker and Elisabeth Moss are fun, hateable yuppie types who are “friends” with Wilsons but in the relatable way of Heidecker and Duke being friends and everyone else just has to awkwardly hang out because of it.

Us is a fantastic, solid horror movie that cements Jordan Peele as a fantastic director with probably many more movies to come.  It doesn’t fully explain what is going on to the extent some viewers might want but if you can accept and roll with the craziness happening, it’s a great, tense ride with some incredible dual performances from the cast.