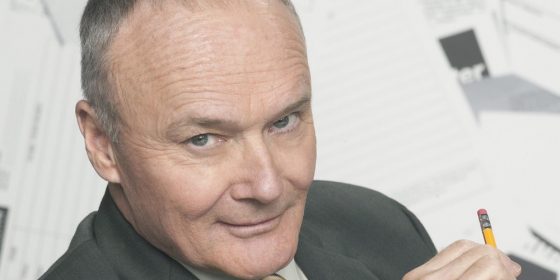 Best known today as arguably the strangest member of Dunder Mifflin, Creed Bratton had decades of musical experience before making his way to Scranton.  Born William Charles Schneider, he changed his name to Creed Bratton and, after becoming a professional musician in high school and college, decided to try the life of a traveling musician, heading all over the world before returning to the states in the mid-’60s.  He and his band The 13th Floor recorded a demo that producers P. F. Sloan and Steve Barri were extremely impressed by and, after adding a new bass player, the band changed their name to The Grass Roots and had huge success during the “Summer of Love”, getting multiple Top 10 hits like “Let’s Live for Today” and “Midnight Confessions” and traveling to various festivals.  Bratton left the band in 1969, growing frustrated that the band was not getting the chance to write their own songs and the record label brought in a different band, The Wrecking Crew, to record the music for albums while the actual Grass Roots only played their own instruments live.  In the early 2000s, Creed released three solo albums before he joined The Office.  There’s a deleted scene from the “Booze Cruise” episode where Creed talks about playing with The Grass Roots.  You can check out a bunch of Creed’s solo songs and some Grass Roots songs below