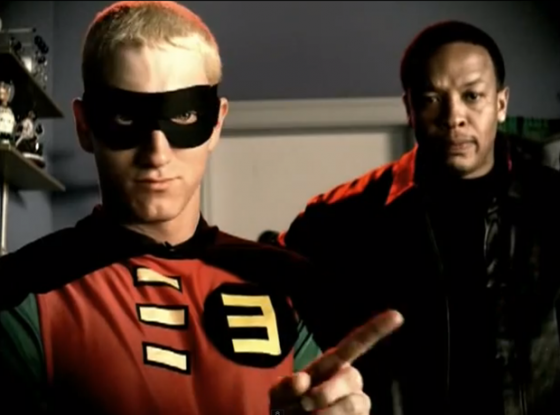 One of Eminem’s biggest hits, if not his biggest hit, was “Without Me” from The Eminem Show album.  Released in May 2002, the song was intended as a sequel to “The Real Slim Shady” which was on The Marshal Mathers LP and was also a massive diss track to many of Eminem’s critics at the time, including Dick Cheney, the FCC, Limp Bizkit, and Moby.  The song garnered Eminem his first Grammy nominations in major categories, including Record of the Year and Best Male Rap Solo Performance.  The song reached #2 on the Billboard Hot 100 and was #1 in many countries around the world, like the UK, Australia, Austria, and Belgium.  The music video won Best Video at the Grammys and was a massive parody of TV and pop culture, including tons of DC Comics references, with the whole video being basically a comic book where “Rap Boy” aka Eminem and Dr. Dre, who seems to be channeling Blade, have to stop an impressionable young boy from listening to an Eminem CD.  You can check out the video below.