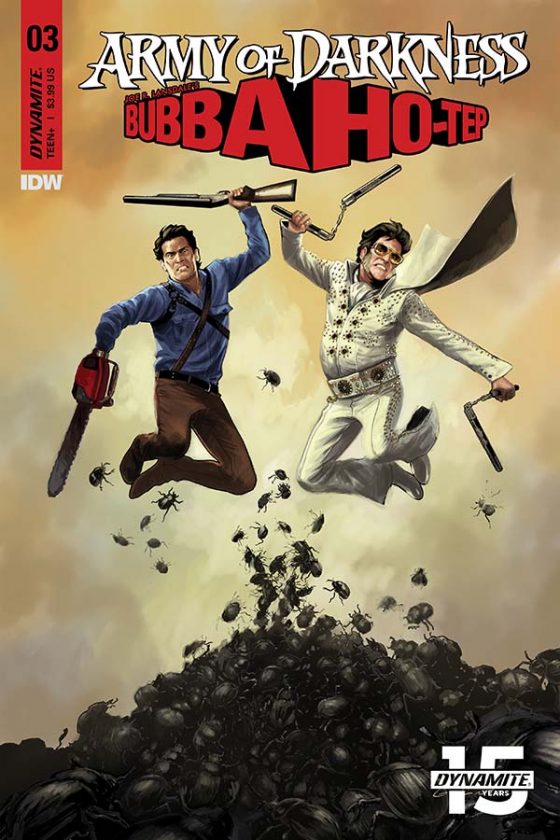 Elvis and Ash enjoy a brief moment to relax and cruise the skies in Elvis’s private jet. Planning to hide the Necronomicon Ho-Tep from Bubba Ho-tep, they travel to Graceland. But the ancient evil won’t give up without a fight. Unleashing scarabs and taking over the flight control, Bubba Ho-tep ruins the groove party onboard. Stuck in the cramped space with no other options, the heroes fight the undead 2000 feet in the air.

When the demon slayers need to fly, they fly in style. Elvis and Ash kick back while they jet to Graceland, celebrating their victory in a battle against Bubba Ho-tep’s mummy minions. The two have become fast friends and since learned to work together. Elvis takes a moment to reflect on his journey and analyzing his visions of adventures yet to come. But the moment is over when scarabs begin to crawl out of every corner. The King fends off the insect invaders while Ash investigates a strange noise from the cockpit.

This issue gives Elvis the main spotlight, following his thoughts and letting him perform some high flying karate moves. Even his inner monologues become accentuated. Elvis’ thoughts have embroidered borders that give his charming flair. Vincenzo Federici and Michele Monte go all out in an explosion of color and style. The artists emphasize Elvis’ amazing bug fighting abilities, Ash’s loopy visions, and a random tonal shift into comics pop art.

Scott Duvall throws Elvis and Ash into a tailspin as the heroes try to survive the deadly as they make their way to Graceland. Bubba Ho-tep seems to have an endless supply of tricks and will use every spell he could think of at the pair. The series heads to the four and final issue, leading to a showdown to see who gets to hail to the king.