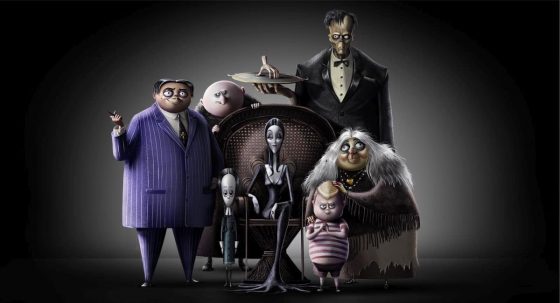 It’s been about a decade since some version of everyone’s favorite ooky and spooky family was on TV or on the big screen but The Addams Family is back this Halloween in a new animated movie.  Coming from directors Greg Tiernan and Conrad Vernon, the team behind Sausage Party, the new Addams Family is based on the original Charles Addams drawings and featuring Oscar Isaac as Gomez, Charlize Theron as Morticia, Nick Kroll as Fester, Finn Wolfhard as Pugsley, Chloe Grace Moretz as Wednesday and Bette Midler as Grandmama.  There are some pretty huge shoes to fill, especially compared to the beloved live-action movies of the 90s with the casting perfection of Raul Julia, Christopher Lloyd, Anjelica Huston, and Christina Ricci and none of the new cast, with maybe the exception of Oscar Isaac, seem to be up to the task and the great Charles Addams designs are great in 2D but grotesque and unpleasant in 3D.  We’ll have to wait until October 11th to see how this new version shakes out and you can check out the first trailer below.