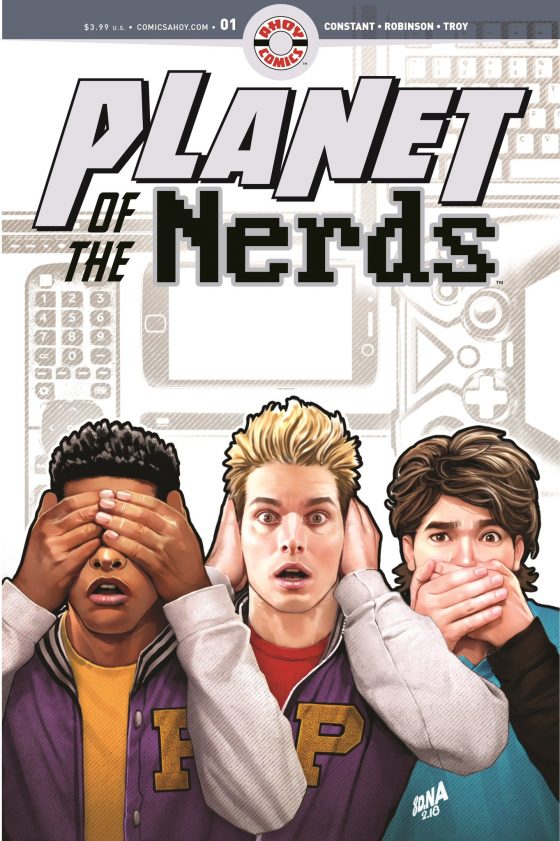 The 1980s was a radical time for amazing wonders such as the MTV, cellphones, Nintendo Gameboy and more. But the 80s’ also developed a terrible product: Nerd hating Jocks. So what happens when three high school teenagers from 1988 get cryogenically frozen and wake up in 2019? They discover the geeks have taken over in Planet of the Nerds.

Chad and Drew are two teenagers packed with teenage angst in a varsity jacket. These jocks pick on the awkward, comic-loving geek Alvin. Chad and Drew’s only voice of reason that stops them from taking things too far is Steve. But on one particular night, Chad, Drew, and Steve stumble into Alvin’s secret laboratory and things go wrong. Decades past by and Chad, Drew, and Steve emerge in a new, nerdier world. What was once dorky and is currently trendy, and now the geeks outnumber the jocks. 2019 looks to be a peaceful era for nerds, but these time-displaced teenagers are going to shake things up.

The secondary comic delves into the backstory of Alvin Pingree, the geeky teen that was secretly experimenting with cryogenic. Alvin attempts to impress his crush at school, mustering the courage to express his feelings. But Alvin is met with rejection, pushing him away from other people. This incident and many like it further explains his mission to work on his science experiment in private.

The premise Planet of the Nerds first appears to follow a typical story about jocks bullying a nerd, but quickly throws in a new twist that lets the jocks become the social outcast. Writer Paul Constant is taking his time in this first issue to slowly introduce the characters and settings, focusing on showing the tension between the bullies and their victim. Chad and Drew are characters you love to hate. They are mean, violent and represents the parts of high school some people want to forget. However, Alvin isn’t exactly a great person either. It’s hard to root for a character that’s not doing a cool science project for something that isn’t really noble.

Alan Robinson and Felipe Sobreiro have great artwork that captures the visual look of the 80s with great character designs. Robinson’s detail on Chad expression when he rages out really shows off the crazed mashup of 80s bullies like Billy Zabka and Biff Tannen (with a Kevin Bacon nose). Sobreiro use of bright tones gives the comic a very cartoonish feel when there is an explosive moment.

Also included in this issue: Fans seat eagerly to see the end of sports game in A Night to Remember by Stephen Miller, with an illustration by Dan Schoeneck. A creature of odd shape and size is described in The Last Night of the Last Bokey-Boeky on Earth by Robert Jeschonek and illustrated by Alice Darrow.