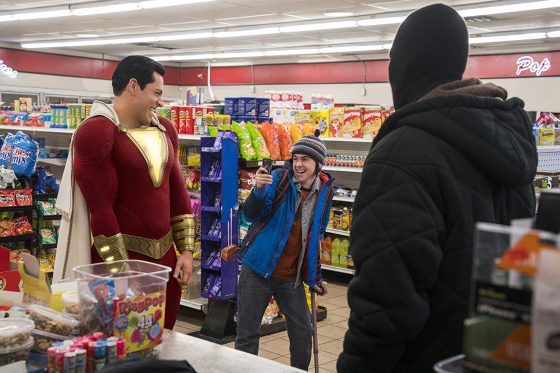 Shazam took the top spot at the box office again for its second weekend out as none of the new releases could top it, most of all the disastrous new Hellboy.

Shazam took in another $25.1 million, bringing it to $94.9 million domestic and over $259 million worldwide.  It’s still by far the lowest grossing DCEU movie and with only a week till Endgame, it will probably stay that way, as it needs over $400 million to reach Justice League’s worldwide take.

Little did the best of the new releases, making $15.5 million for second place.  As far as body-swap comedies, it’s between 13 Going On 30 and The Change-Up. Compared to the producers’ other movies that poster touted, like Girls Trip and Night School, it opened to around half as much as either of those movies and it’s toward the middle as far as openings for Regina Hall, sitting between Death at a Funeral and Vacation but it also only cost $20 million, so it should make a decent chunk of change for Universal.

The new Hellboy took third place but it’s being considered a disaster on pretty much every level.  Reviews were extremely brutal and the movie made $12 million over the weekend, which way below expectations, which were pushing it closer to $20 million.  The movie cost $50 million plus whatever promotions cost. The Guillermo Del Toro movies opened to $23.1 million and $34.5 million when they were released in 2004 and 2008.  The audience reaction to the new Hellboy was about on par with critics, with it getting a C Cinemascore, meaning word of mouth will most likely be terrible and if it nosedives next week, it’s basically dead.

Pet Sematary and Dumbo rounded out the top 5, the former dropping 59% from last weekend’s opening with $10 million and it’s made $76.8 million worldwide so far.  Dumbo has made just over $267 million worldwide.

Surpassing expectations was After, a movie based on fanfiction about Harry Styles of One Direction.  After made $6.2 million, which is nowhere near any of the Twilight or 50 Shades movies but still above studio expectations and had a strong turnout from female viewers under 25.

The critically beloved Laika suffered another blow as Missing Link debuted as their lowest opening ever, only making $5.8 million.  With the exception of The Boxtrolls, Laika has seen a downward trend since Coraline, with Missing Link making less than half of what Kubo and the Two Strings made.

The Per Theater average went to Her Smell, which made $13,019 in each of the 3 theaters it debuted in.  The movie stars Elisabeth Moss as a punk rocker trying to get sober and make a comeback.