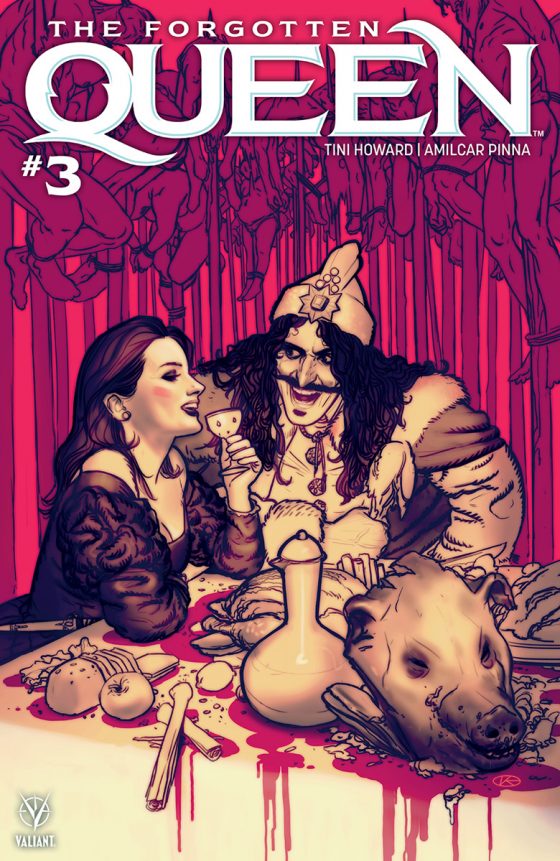 Rejected by Khutulun the Mongolian Khan, Vexana has become heartbroken and wants to vent frustration in a fight. Khutulun leads a team of peacekeepers under a banner known as Unity, and they do not tolerate Vexana’s destructive behavior. Cast out of the Mongolian desert, Vexana wanders into the open arms of a warrior seeking her powers, Vlad Tepes, warlord of Wallachia. With Vexana at his side, Vlad would become the bloodthirsty monster known as Dracula.

Denied and abandoned, Vexana longer cares about winning her lover’s affection, but to interrupt Khutulun’s plans. Khutulun refuses to give Vexana satisfaction, ending their relationship the only way Vexana can understand.  One powerful punch later, Vexana is once again alone. But Vexana is drawn to a person who desires great power. Vlad Tepes craves the violent lust that drives mortal men insane. Vlad welcomes Vexana into his kingdom, creating a terror that would leave a bloody trail for Unity to find.

Writer Tini Howard takes the romantic rebound to a new level. Vexana discovers a connection to Vlad Tepes, a ruler that becomes a brutal conqueror. Finding a new home, Vexana is at Vlad’s side as he lays down a blood-spattered campaign. Howard adds an interesting twist to the historical fiction, portrayal as Vexana a critical figure in Vlad’s forces. But Vexana can’t be ignored for too long by Unity, in any time period. The story heads to its final chapter with the shocking truth behind Vexana’s past and where her future offers in the next issue.