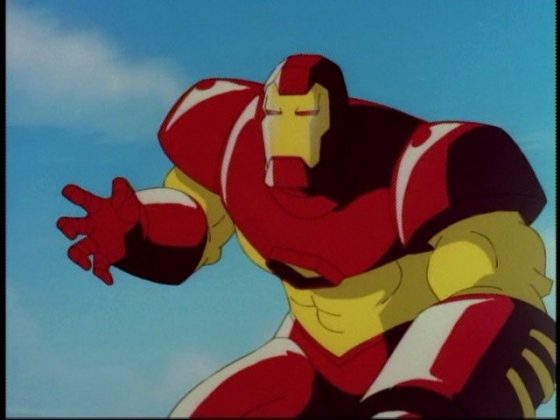 Well before the MCU, the only place for young Marvel fans to get their fix, besides the comics, was weekday afternoons and Saturday mornings with cartoons like the iconic 90s Spider-Man and X-Men on Fox.  On the slightly lesser end of the spectrum was 1994’s Iron Man, which was part of a syndicated 1-hour block called the Marvel Power Hour.  Iron Man paired up with the third animated series for the Fantastic Four and both shows ran for two seasons.  Robert Hays, who has also appeared in Airplane! and Homeward Bound, voiced Tony Stark while the great James Avery voiced James Rhodes/War Machine for the first five episodes and then Dorian Harewood took over in episode 6 onward.  Ron Perlman, Robert Ito, Jennifer Hale, Ed Gilbert, Jim Cummings, Neal McDonough, David Warner, and Matt Frewer were also featured on the show in recurring or guest roles and the show featured a pretty wide variety of Marvel heroes and villains.  The first episode, the ominously titled “And the Sea Shall Give Up its Dead” featured Tony battling The Mandarin, who has turned a submarine crew into zombies and the episode also features Hawkeye, Century, Scarlet Witch, Spider-Woman, War Machine, Justin Hammer, Mandarin, MODOK, Blacklash, Blizzard, Dreadknight, Fin Fang Foom, Whirlwind, Grey Gargoyle, Hypnotia, and Titanium Man.  You can check it out below.