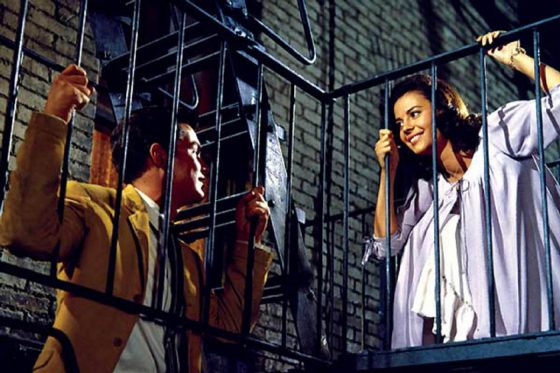 Since it first debuted on Broadway in 1957, West Side Story has become one of the most influential and beloved musicals in history and the 1961 film version, in particular, is considered one of the, if not the greatest, movie musicals of all time.  It won 10 Oscars and was considered by the AFI to be the second best movie musical of all time behind Singin’ in the Rain.  Starring Natalie Wood and Richard Bymer as Maria and Tony, they meet and fall in love at a local dance but they are either side of a gang war in the titular West Side of New York City between the white American gang the Jets and the Puerto Rican gang the Sharks, with Maria’s brother Bernardo leading the Sharks and Tony being best friends with Jets leader Riff.  The entire story is a take on Romeo & Juliet and ends just as tragically as that Shakespeare classic.  The director and choreographer of the 1957 stage version, Jerome Robbins, co-directed the movie with Robert Wise, who also directed the film version of The Sound of Music.  The iconic music was created for the Broadway musical by Leonard Bernstein and Stephen Sondheim and most of the cast was dubbed over except for a few instances, like Rita Moreno having her actual vocals used in the song, “America”.  The songs from West Side Story have become standards and have been used in parodied for decades and Steven Spielberg is gearing up for a new film version that is shooting this summer.  Check out the songs from the film version below.