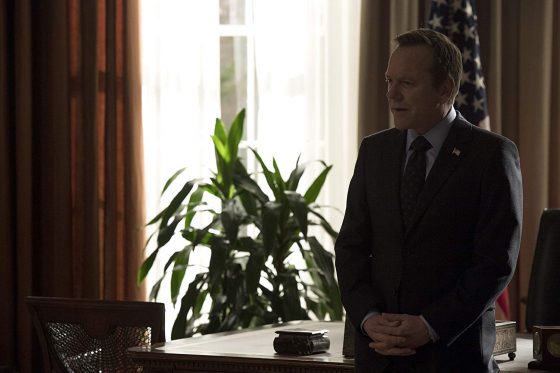 Unless there’s another example I can’t think of right now, Designated Survivor is the first major network series to make the jump to streaming following a cancellation.  ABC canceled Designated Survivor after season 2 aired but Netflix picked up the rights and will air Season 3 starting on June 7th.  Kiefer Sutherland is back as President Tom Kirkman, who became president when a terrorist attack wiped out most of the government at the State of the Union.  Since taking office, Kirkman has had to deal with a number of West Wingesque issues while FBI agent Hannah Wells (Maggie Q) investigated the Capitol attack, unraveling a massive conspiracy that included surviving members of government, wealthy businessmen and more.  Despite the move to Netflix (and looser restrictions), it seems like DS won’t suddenly turn into House of Cards and will keep it’s same weird mix of fantasy politics that seems to always be on the opposite side of whatever the real-life administration in the White Hous is doing and 24-lite style action as Kirkman begins his campaign for re-election while Hannah joins the CIA and uncovers new threats.  Anthony Edwards, Julie White, Elena Tovar, Lauren Holly, and Benjamin Watson are joining the main cast for the new season with Italia Ricci, Kal Penn, McKenna Grace and Adan Canto.  Check out the Season 3 trailer below.

Halle Berry Enters the Octagon in November with Bruised (Trailer)

Up to Speed: Designated Survivor Season 3