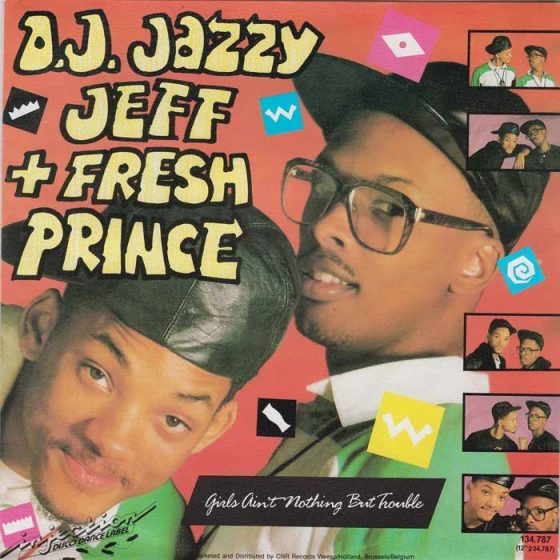 Will Smith is putting his spin on iconic Aladdin songs at the end of this week but back in 1987 when he was still The Fresh Prince, he was having relationship issues in “Girls Ain’t Nothing But Trouble”.  The lead single off of the Rock the House album, DJ Jazzy Jeff samples the “I Dream of Jeannie” theme as Will raps about a number of hilarious misunderstandings and incidents that occurred when he interacted with the fairer sex, including getting arrested for picking up a prostitute and going home with a girl from a bar and facing off against her angry boyfriend.  For the music video, which was released in 1986, the set is basically the same funky, graffiti-filled room from “Nightmare on my Street” and “Parents Just Don’t Understand” with Will traveling to different locations as he recalls the various incidents from the song.  The song was featured on The Fresh Prince of Bel Air and DJ Jazzy Jeff also reused parts of the song for The Simpsons single, “Deep, Deep Trouble”.  You can check out the music video below.