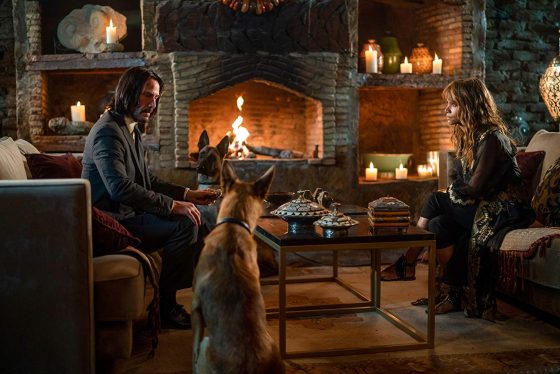 The John Wick franchise has become one of the greatest action series of all time and Chapter 3 – Parabellum only increases that reputation, continuing to up both the insane action choreography and the brilliant and fascinating world-building of the Wickverse.

Picking up immediately after Chapter 2, John (Keanu Reeves) has a 1 hour before he’s “excommunicado” and barred from The Continental and its resources and a $14 million international bounty is put on his head.  John has to battle his way out of NYC and ends up in Casablanca and teams with an old “friend” Sofia (Halle Berry) to try and find The Elder of the High Table and get his life back, no matter the cost. While John is Morocco, The High Table sends The Adjudicator (Asia Kate Dillon), an investigator/enforcer, who determines what the punishment should be not just for John killing Santino d’Antonio, but for everyone who helped him, like The Bowery King (Laurence Fishburne) and Winston (Ian McShane).  The Adjudicator recruits sushi chef/ninja assassin Zero (Mark Dacascos) and his students to act as their agents in dealing out punishment. The acting is fantastic as always, with Keanu continuing to be perfect as the titular zen badass and the new additions are all great, especially Kate Dillon, Berry and Dacascos, the latter of which plays his character like he’s a fan of the franchise who also happens to be an assassin in it, getting super psyched for his imminent battle with John. Kate Dillon is also a huge step up in the antagonist role, which rewatching Chapter 2 again was definitely the weakest part of that movie and what probably makes it the weakest John Wick overall (although that’s like saying this delicious steak is not quite as delicious as these other two steaks) and they have ruthlessly calm demeanor and no room for negotiation or sympathy.  My only main nitpick with the cast is that Jason Mantzoukas is not as big a presence as I think we all hoped he would be. He only really has 1 line and then is just hanging out with Laurence Fishburne and if this is the reason he wasn’t a regular again on Season 2 of I’m Sorry, I think I might have actually preferred he be in the latter but hopefully he’ll back and have a bigger role in Chapter 4 (which was announced for 2021)

The increasingly complicated and deepening universe of The High Table and The Continental is what definitely sets the John Wick universe from other more generic action movies and Parabellum continues to uncover new corners of the universe and new wrinkles to the rules and conduct and we get some more backstory about John and more information about how everything functions under The High Table.  Usually adding complexity just makes things worse but Chad Stahelski and his writers have figured out the perfect way of doling out information that constantly makes you want to find out more about this world.

The other thing that separates the John Wick franchise from everything but the most elite current action, like The Raid movies, is the action and, my god, the action in Chapter 3 is absurdly great.  Every set piece of John Wick feels like it would be the finale in any other action movie and the choreography is unparalleled. The sequences also seem to just keep going in the best possible way, going for 15-20 minutes of non-stop insane action and Chapter 3 also gets incredibly creative with the weapons at John’s disposal.  There’s still an entire armory worth of guns but John also uses knives, books, and even horses as weapons to take on all the assassins gunning for him and Sofia has two German Shepherds that factor into arguably the greatest action sequence of the film.

John Wick Chapter 3 is an absolute action masterpiece and a must-see for anyone who considers themselves an action movie fan.  I think the first film may edge this out just for the sheer originality factor and brutal efficiency but Chapter 3 is just barely behind it and definitely better than Chapter 2, which again, is still great but had a few flaws that Chapter 3 doesn’t.  Chapter 4 cannot come soon enough and hopefully, if it maintains this level of quality, it will continue for a long time.