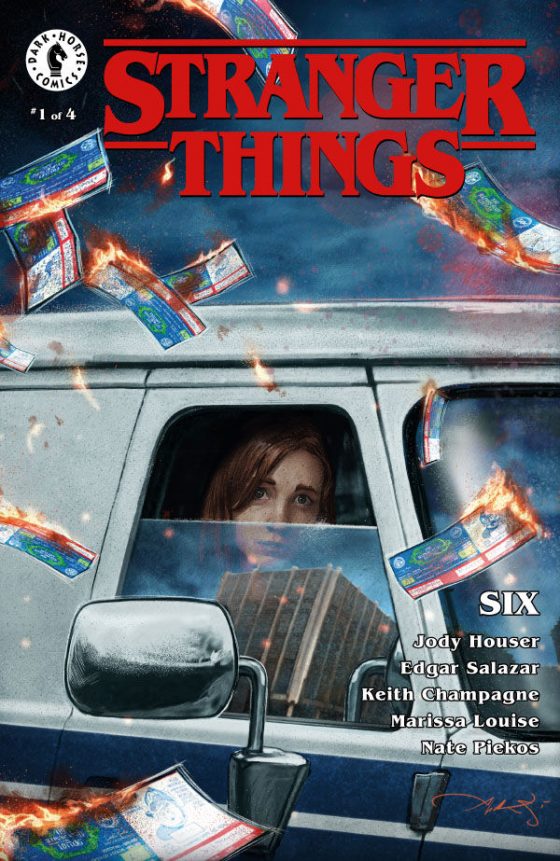 Set years before the events of the original Stranger Things, Stranger Things: Six follows the adventure of a young girl named Francine. Kept as a test subject at Hawkins National Laboratory, Francine has precognition abilities. Given the codename Six, she is assigned to a special project to control her powers. Stranger Things: Six will tell the never before seen history of Project MKUltra and the hidden visionary test subject.

Issue one reveals the early signs of Francine’s powers. At a young age, she began to receive fractured premonitions, giving her a confusing insight into the future. Instead of helping Francine, her parents saw an opportunity to take advantage of her powers. Eventually, the government becomes involved, turning Francine into the test subject Six.

Writer Jody Houser revisits the Stranger Things universe with a new protagonist, familiar faces, and the abnormal sights from a dark realm. This prequel series gives a different perspective of the inhabitants of Hawkins in the 70s and the events that would set in motion for the incident that occurs in 1983. The first issue does a great job to introduce Francine and her background motivates her to become Six. Her story perfectly complements the original source, shedding some light to the secret experiments conducted at the Hawkins Laboratory.

The art team of Edgar Salazar, Keith Champagne, Nate Piekos, and Triona Farrell bring the story to life with great visuals. The illustrations and colors deliver on the gloomy mystery vibe tones. Edgar Salazar character designs capture the playful emotions from a young Francine’s and the bitter resentment of a captive Six. Keith Champagne and Triona Farrell add a touch of overshadowing to every panel, giving each panel a dramatic feel. The Hawkins Laboratory already houses to many riddles, and the artists make it extra chilling.

If fans aren’t excited from the new trailer for the next season of Stranger Things, then this comic book series should help build up that buzz. Stranger Things: Six aims to explore more about the undisclosed research behind the project to contact another world. Six is an interesting character confined to the rule of others, and her fight for control has just begun.