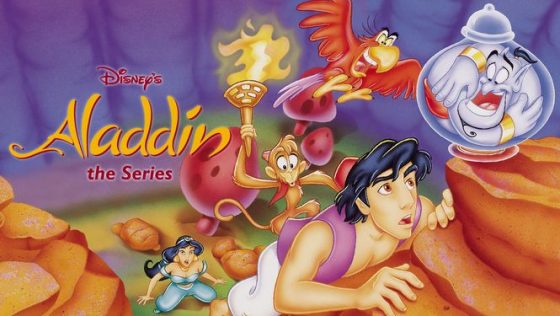 In addition to the live action remake hitting theaters this weekend, Disney’s Aladdin has had one the most extensive expanded universes of any Disney classic, with two sequel movies to the original film and an animated series that ran for 86 episodes from 1994-1995.  Arriving in September 1994, the series takes place after The Return of Jafar, which hit video in May of 1994.  Although the animation quality was noticeably downscaled from the movies, Aladdin: The Series was still higher quality than a lot of other 90s cartoons and had Disney Afternoon vets Alan Zaslove and Tad Stones at the helm.  Zaslove and Stones previously worked on Chip N Dale and Darkwing Duck and Aladdin shared those shows mix of adventure and comedy. Most of the cast from the movies actually reprised their roles for the series, with Scott Weinger back as Aladdin, Lisa Larkin voicing Jasmine and Gilbert Gottfried voicing Iago.  Dan Castellaneta took over as The Genie and is obviously one of the greatest voice actors of all time but even his talents couldn’t compare to Robin Williams.  There seems to be some dispute online about which episode of the series is first.  The series debuted for an extremely short first season of nine episodes on Disney Channel and then most of the rest of the episodes debuted on both CBS and in syndication as part of the Disney Afternoon alongside Darkwing Duck, Goof Troop, Bonkers, Gargoyles, and Timon & Pumbaa.  Wikipedia claims the episode below, “Getting the Bugs Out” was the first episode of the Disney Channel season and it follows Aladdin and the gang battling an evil inventor named Mechanicles, who has sent an army of robotic bugs to attack Agrabah.  Check it out below.