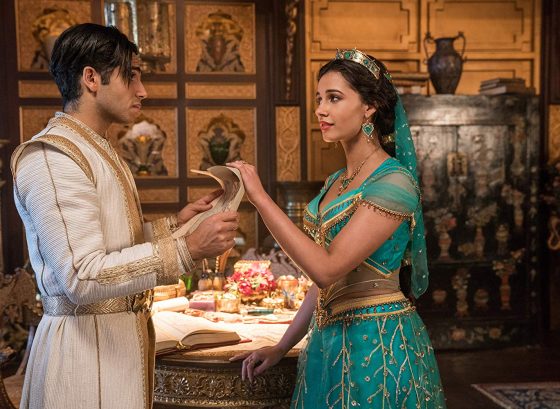 Disney’s world domination continued over the holiday weekend as Aladdin took the top spot at the box office.

The live-action remake of the animated classic took in $90.4 million for the weekend and an estimated $112.7 million for the four day weekend.  It’s three day weekend is the fourth best of the live-action Disney remakes, between The Jungle Book and Oz: The Great and Powerful but almost $100 million less than Beauty and the Beast’s opening weekend.  It’s also the fifth highest grossing Memorial Day opening of all time.  Worldwide, the movie opened in basically every market except Japan and made an additional $121 million, putting its full global opening at over $233.7 million.

John Wick Chapter 3 dropped around 45% from last weekend and took in another $31 million for the four day weekend.  It’s now the highest grossing John Wick movie with just over $107 million domestically and over $182 million worldwide.

Avengers: Endgame took third place with another $22.3 million for the holiday weekend, putting it over $803.6 million domestically and over $2.677 billion worldwide, putting it around $111 million behind Avatar for the all-time highest grossing film of all time. Adjusted for inflation, it’s now the 19th highest grossing film of all time domestically, between The Phantom Menace and The Lion King.

Detective Pikachu and Brightburn rounded out the top 5.  The latter opened with $9.5 million, which is slightly below studio expectations and it doesn’t have great word of mouth, getting a C+ from Cinemascore audiences.

The other new release, the critically acclaimed Booksmart took in $8.6 million for the holiday weekend.  Compared to other high school comedies, it sits between The New Guy and 10 Things I Hate About You.