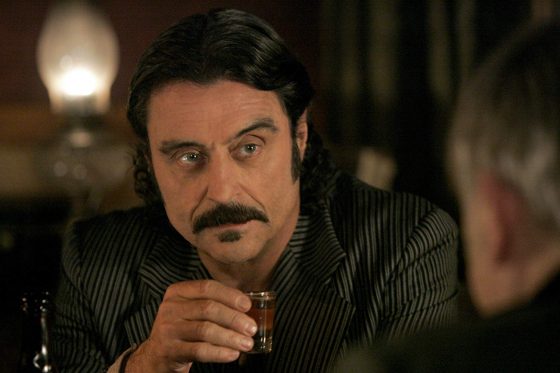 Now that Game of Thrones is over, HBO is finally returning to one of their most critically acclaimed series to wrap it up properly, Deadwood.  A finale movie is arriving on HBO this Friday (5/31) that is set 10 years after Season 3 and will wrap up all the lingering plot points and character arcs that were left when the show was canceled back in 2006.  Created by David Milch, the series started in 2004 and starred Ian McShane and Timothy Olyphant as Seth Bullock and Al Swearengen in Deadwood, South Dakota.  Bullock was the law and Swearengen ran most of the criminal enterprises and the series involved their back and forth conflict along with a huge ensemble cast that included other historical figures like Wild Bill, Calamity Jane, Jack McCall, George Hearst, and Wyatt Earp.  The series was based on historical fact but also took some liberties as well and Milch actually used real Deadwood newspapers and diaries from residents to craft the show’s characters and plot.  All three seasons are on HBO right now but if, for some bizarre reason, you just want to jump right into the movie, HBO put out a series recap video, which you can check out below.

Up to Speed: Ballers Season 4

Up to Speed: Game of Thrones Season 3

Up to Speed: Justified Season 4