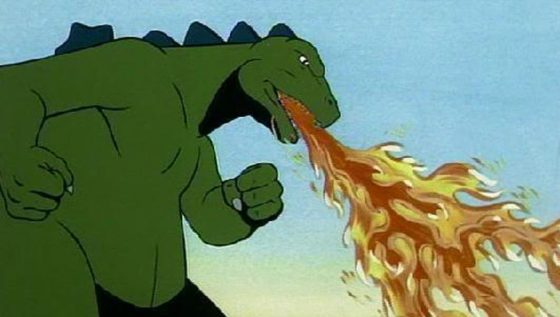 Between the end of the Showa series of Godzilla movies with Terror of Mechagodzilla and the beginning of the Heisei series with Return of Godzilla, Hanna-Barbera acquired the rights from Toho to make an animated series in 1978 called Godzilla.  The show ran until 1981 with two seasons consisting of a total of 26 episodes and followed the adventures of the research team aboard a hydrofoil called the Calico.  The team consisted of Captain Carl Morgan, Dr. Quinn Darien, Dr. Quinn’s nephew Pete and her research assistant Brock.  The team also had Godzooky on their side, who was Pete’s best friend and Godzilla’s nephew.  Godzooky could call on his uncle and the Big G would arrive to help the team out of whatever jam they got into, usually battling some other giant monster at the end of each episode.  Cartoon Godzilla could only breathe fire, he no longer had his various atomic powers and while Godzooky could potentially breathe fire as well, he could usually only muster smoke rings.  In the first episode, which you can check out below, the Calico team has to stop a gigantic firebird, who is laying eggs in the Arctic and could potentially melt all the polar ice and flood the planet.