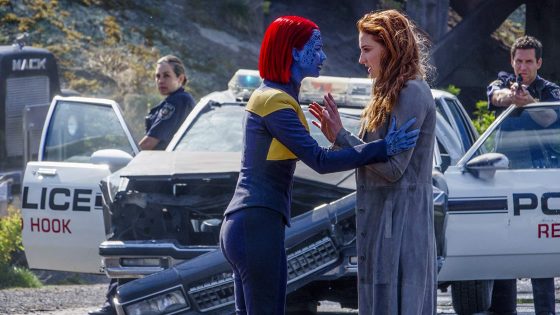 After just shy of 20 years, Fox’s X-Men franchise comes to a close with Dark Phoenix but what could have been a big, grand send-off is instead a boring, uninspired slog that ends the franchise on arguably its lowest note ever.

Set in 1992 (although this franchise has a willful disdain for continuity or time), Dark Phoenix kicks off with the X-Men being sent into space to rescue a team of astronauts at the behest of the president (who has a Batmanesque X-Men phone in his office).  While on the mission, Jean Grey (Sophie Turner) absorbs some sort of powerful energy source and begins to struggle with keeping its power contained (disregard the fact that Jean unleashed the Phoenix at the end of X-Men: Apocalypse). A mysterious alien race led by Vuk (Jessica Chastain) arrives to try and claim the power for their own goals.  There are almost too many issues with the plot and characters to list but it mostly boils down to being boring rehashes of past X-Men movie plot points, like Magneto (Michael Fassbender) trying to live a peaceful life but having to get drawn back in. The entire emotional crux of the plot also rests on characters we barely got introduced to in Apocalypse.  Obviously characters like Jean, Cyclops (Tye Sheridan), Storm (Alexandra Shipp) and Nightcrawler (Kodi Smit-McPhee) had previous incarnations but with the lack of continuity that plagues the franchise and the inconsistency of the characters from movie to movie, they are basically new characters and Jean’s struggles and her relationship to the rest of the team do not land at all.  There’s a BFF relationship between Jean and Mystique (Jennifer Lawrence) that comes out of absolutely nowhere in Dark Phoenix and it also expects the opening 10 minutes to be enough to sell Charles’ (James McAvoy) entire character arc. There are also weird, half-formed ideas like, apparently, Nightcrawler is supposed to have an arc where he goes from cowardly to bad-ass that is not developed at all.  The villains are also some of the worst not only for the X-Men franchise but superhero films in general. Whatever alien race Jessica Chastain and her cronies are, they are emotionless and flat by nature but that doesn’t translate to interesting or fun villains. As terrible as Apocalypse was, at least he gave us so bad it’s good moments like “LEEAARNING”.

Action wise, Dark Phoenix is…fine?  There’s some decent mutant powers action, mostly in the astronaut rescue scene or a brawl in downtown NYC but it’s nothing that hasn’t been done before, and better, in previous X-movies.  Also, the psychic nature of Jean and her powers results in a lot of characters awkwardly staring each other down intensely while holding up their hands that looks less cool and more like that episode of South Park where Cartman battled the other police psychics.  Given the source material, they could have gone crazy and cosmic (effing Dazzler is in this movie!) and instead it’s uninspired, reheated leftovers from prior X-Men movies. What’s perhaps the most insane thing about this whole mess is that Simon Kinberg, who has written and produced most of the X-movies and makes his directorial debut here, already tried and got criticism for screwing up the Phoenix storyline in The Last Stand but somehow, instead of taking that criticism and doing something more faithful to the comics, he made it even worse.  There’s not even Hugh Jackman or Kelsey Grammar to save us this time (although to be fair, Nicholas Hoult is the one person who truly seems like he’s acting his ass off to try and salvage something out of this disaster).

As terrible as some of the entries in the X-Men franchise have been, when the movies were good, they were usually great (Logan, X2, Deadpool, Days of Future Past) and it’s a disappointing shame that it goes out with such a wet fart like Dark Phoenix.  I’ve said before on the podcast that this movie was a lame duck and it truly lives up to that; instead of taking the opportunity to send off these characters on a high note, they’ve taken the attitude of “none of this matter, so who cares?” and just delivered one of the most perfunctory and lifeless superhero movies in recent memory.  It’s probably best to pretend the mainline X-Men movies just ended with Days of Future Past and forgot these last two movies even happened.