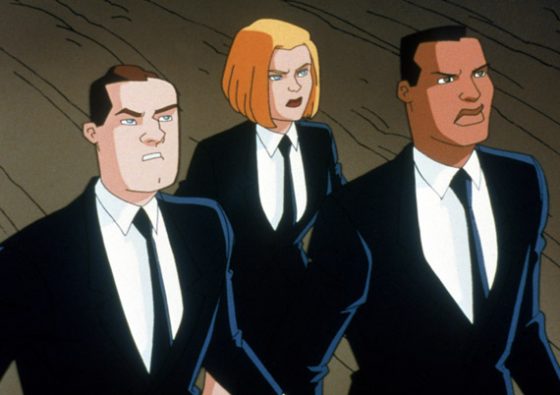 Tessa Thompson and Chris Hemsworth are taking the reins of the Men in Black franchise this coming weekend but back in 1997, the adventures of J and K continued on Men in Black: The Series on KidsWB.  The show was produced by Adelaide Productions, who seemed to corner the licensed cartoon market in the late 90s and early 2000s with shows like MiB and also Godzilla: The Series (based on the 1998 movie), Extreme Ghostbusters, Roughnecks: Starship Troopers Chronicles, Jumanji, Jackie Chan Adventures and more.  MiB is basically set in an alternate timeline from the first movie where K didn’t retire after taking down Edgar and he and J continue to be partners while L still joins the MiB and joins the medical/science division.  Characters like Jeebs and Frank the Pug also show up but besides the basic characters and setup, it’s basically its own thing.  There were some awesome alien designs throughout the series and it drew in some heavy hitters as guest stars, including David Warner, Billy West, Charles Napier, Ron Perlman, Kurtwood Smith, and Vincent D’Onofrio even came back to play Edgar’s twin brother Edwin, who is after a bounty put on L’s head by the Queen Bug.  You can check out the entire first episode below.

Musical Montage: Pitbull “Back in Time”