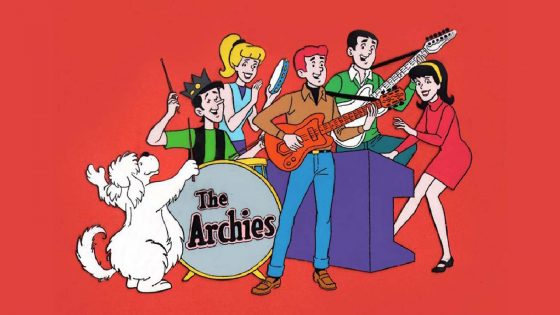 It’s hard to believe nowadays as the most famous incarnation of Archie and the gang is currently the absurd darkness of Riverdale but back in the late 60s and early 70s, the gang was one of the biggest bubblegum pop acts in the world with their fictional band, The Archies.  A part of The Archie Show, an animated series from Filmation that ran from 1968 to 1969, the series was similar to other shows like The Monkees, where there would be the episode’s story followed by a new original song played by the show’s band, in this case, The Archies.  Archie was lead vocals and lead guitar, Jughead was on drums, Reggie was on bass, Veronica was on keyboards and Betty was on tambourine and rhythm guitar.  In real life, the group consisted of Ron Dante, Toni Wine, Jeff Barry, Donna Marie, Bobby Bloom, and Chuck Rainey, all studio musicians at RCA.  There were a number of songs across the 17 episodes of The Archie Show but “Sugar, Sugar” far surpassed everything else.  Released as a single in 1969, it was #1 on the Billboard charts for four weeks and became the #1 song of the year.  A year later, Wilson Pickett covered the song, which did well but nowhere near as well as the original.  You can check out the song from its debut on The Archie Show below (which features a cameo from Sabrina the Teenage Witch!).