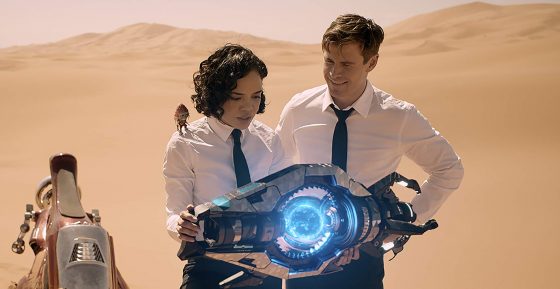 Since the first Men in Black hit in 1997, the franchise has been a series of diminishing returns, from the lows of Men in Black 2 to the fun but flawed Men in Black 3.  Men in Black International attempts to soft reboot the franchise and while it isn’t terrible, it literally does nothing new or original to justify its existence.

Tessa Thompson stars as Agent M, a probationary MiB agent who managed to track down the elusive agency after 20 years following an incident involving an alien as a child.  M’s parents were neuralyzed but she was not and she became obsessed with the MiB and aliens.  Impressing O (Emma Thompson) when she’s caught breaking into MiB HQ, she’s given her probationary status and sent to London to investigate some potential shady things going on at that MiB branch, run by High T (Liam Neeson).  M is paired with H (Chris Hemsworth), a cocky and reckless agent who, along with High T, stopped an invasion by the evil Hive aliens, a species that absorbs and takes over its victims form.  When a pair of Hive return and target a member of alien nobility, H and M come into possession of a powerful alien weapon but also learn that there is a mole in London MiB and have to figure out who to trust and how to deal with the weapon.  The plot feels like it’s running through a checklist of tropes established in the MiB franchise and, even with all the globetrotting, it doesn’t do anything fun or interesting with the MiB franchise.  There are a few fun hidden alien moments but it mostly feels uninspired and boring, like they wanted to just do a Mission: Impossible-style movie but got saddled with the MiB license.  There’s a twist that is blatantly obvious from almost the opening frame and the villains, while visually interesting, are a non-presence but, besides Vincent D’Onofrio, the franchise has always had not great villains.

The big draw for this movie based on trailers and hype was the re-teaming of Chris Hemsworth and Tessa Thompson.  The pair had a great back and forth in Thor: Ragnorak and they are both still incredibly charming but none of the comedy really pops.  The whole movie feels like a first draft that is going to get punched up later and then it never did.  Chris Hemsworth is comfortably in “dumb Thor” mode as H, coasting on his past exploits and handsomeness which drives fellow MiB agent C (Rafe Spall) up the wall and Kumail Nanjiani is reliably funny as Pawny, a diminutive alien warrior who pledges his loyalty to M.  Tessa Thompson is more of the straight man in the pairing but she gets some fun moments and one-liners, mostly in exasperation with H’s antics.  Rebecca Ferguson also seems to have fun as alien arms dealer Riza but the only thing that makes her an alien is a third arm, which feels extremely lazy.  Actually, a lot of the aliens look pretty cheap and the designs are not great, definitely not up to the standards of the previous movies, and it could have used a few more practical creatures and fun gadgets and tech.

MiB: International is inoffensive but also completly unremarkable.  It feels like the perfect Redbox or streaming movie, where you’ll find it in a few months and be like, “Oh right, they made a new MiB, guess I’ll check that out” but it is definitely not something to rush out to the theater and seek out.  Chris Hemsworth and Tessa Thompson are great but this movie is definitely not a showcase for their chemistry and comedic chops.