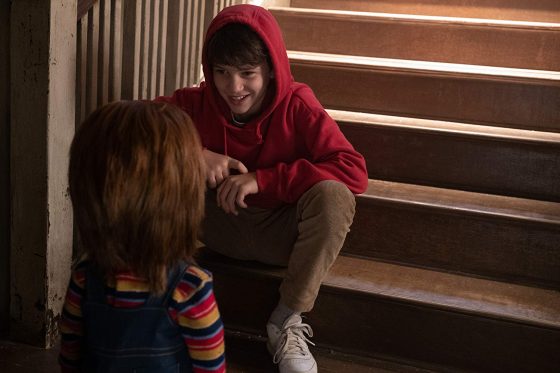 The reboot of Child’s Play is in a very bizarre situation.  It’s not like the franchise has been dormant, as Cult of Chucky came out in 2017 and there’s a new TV series in the works with Don Mancini and Brad Dourif attached to continue the series.  That being said, the new reboot admirably tries to do something different with the basic premise of a murderous doll to pretty fun, if unnecessary, results.

Aubrey Plaza stars as Karen Barclay with Gabriel Bateman as her 13-year-old son Andy.  They’ve just moved and Andy is having a hard time making friends and adjusting, so Karen finagles a returned and possibly defective Buddi doll from the department store she works at.  At first, Andy is not very impressed with “Chucky” but he soon learns that Chucky is unique and does not seem to have the normal limitations that regular Buddi dolls have. Unfortunately, that’s because a disgruntled sweatshop disabled all of Chucky’s safety features at the factory.  It should probably be noted that, unlike the original, the new Chucky is a full-on robot and can walk and talk before any of the murderous hi-jinks ensue, whereas the original Chucky was just a stuffed doll with an animatronic face. Perhaps the weirdest thing about this new Child’s Play (besides Aubrey Plaza as a mom) is that for at least half the movie, Chuck is actually kind of sweet and sympathetic.  That’s probably mostly due to another brilliant vocal performance from Mark Hamill, who sells Chucky’s naivete and attempts at friendship that slowly twists until the chaos of the finale. The new Chucky’s main drive, unlike the infamous Charles Lee Ray, is to protect Andy by any means necessary and his unhindered programming lets him take that to some extreme places. The movie also has some fun with Chucky’s connectivity to the cloud, allowing him to take over any product from his parent company, Kaslan, and utilize things like thermostats, robotic vacuums, drones and other Buddi dolls in his killings.

Along with the aforementioned, and always great, Mark Hamill, the rest of the cast is solid as well.  Aubrey Plaza is slightly restrained but seems like she was mostly allowed to be her snarky and weird self, with some funny one-liners and is overall a looser and more fun take on Karen than Catherine Hicks (It actually kind of feels like if you made Maggie from the original movie Andy’s mom instead).  Brian Tyree Henry co-stars as Detective Mike, the Barclay’s neighbor down the hall who is also the investigator on Chucky’s kills. He’s extremely affable and charming but he doesn’t really have much to do and there’s not a lot of focus on what the police think is going on. That’s definitely one area where the reboot is weaker than the original, as the “Is Andy Crazy?” aspect feels tacked on and unexplored here and it builds to a really weird point right before the finale.  There are also some attempts at getting some Stranger Things/IT heat by giving Andy a group of friends that join him but they never really get fleshed out and don’t even factor into the finale and there’s also definitely less tension than the original due to Andy and his friends being snarky teens and not a highly vulnerable and impressionable six year old.

This new Child’s Play is in a weird spot.  It’s a pretty fun reboot that definitely goes in a different direction than the original, which is what you would normally want, but the original franchise is still going strong and the real Chucky is coming back hopefully very soon.  If you want to see a kind of weird alternate reality version of Chucky, this reboot would be one to check out on streaming or Blu-Ray but you definitely don’t need to rush out and see it in theaters.